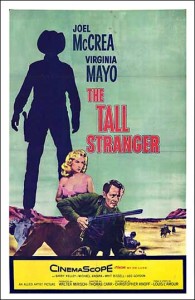 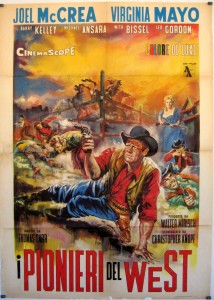 The stranger of the title is played by Joel McCrea, coming toward the end of his career, and he’s a bit long in the tooth for the role he plays in this combination wagon train-range war story with a convoluted plot based on a story by Louis L’Amour.  But he is still Joel McCrea, and, like Gary Cooper, he can still hold our attention and make us forget about his age.

Ned Bannon (Joel McCrea) is heading home to Bishop Valley in Colorado Territory from the Civil War, when he spots rustlers and one of them ambushes him, shooting him and killing his horse.  All he saw of his assailant was a gold-plated rifle, along with fancy spurs.  He wakes up in a wagon heading west; a wagon train had found him, and Ellen (Virginia Mayo), a widow with a young son, had found room for him.  There is some hostility toward him among members of the wagon train.   Bannon was wearing parts of a Union uniform, and most of them are southerners and former Confederates. 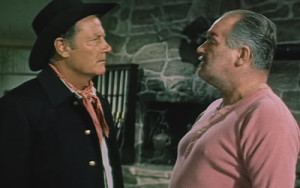 Ned Bannon (Joel McCrea) returns home from the war to have it out with his brother (Barry Kelley).

He finds that they are led by a man named Harper (George Neise), and, although they think they are going to California, they are far south of the normal trail, heading for Bishop Valley, from which there is no good trail farther west.  Bannon is unlikely to get much of a welcome from the local cattle baron Hardy Bishop (Barry Kelley), his half-brother.  During the recent war, Bishop’s only son Billy had joined Quantrill’s Missouri border raiders, and Bannon had led the Union cavalry that captured him, among others of Quantrill’s men.  The son had been executed.  Bannon has to fight Bishop before Bishop will listen to him at all, but Bannon persuades Bishop to give him three days to talk the wagon train into leaving the valley.

Bishop approaches the wagon train with Stark (Leo Gordon, in a rare good guy role), Bishop’s foreman, and Red.  Harper goads Red into drawing his gun and shoots him; in the melee that follows, Mrs. Judson is killed, although Bannon sees that she was shot from behind with a hollow-point bullet—the same kind with which he had been ambushed.  Ellen is bathing in a stream when she is attacked by Zarata (Michael Ansara), leader of Harper’s rustlers; he has a gold-plated rifle and fancy spurs.  Bannon fights Zarata and seems to be winning, until Zarata grabs Ellen’s son and uses him as a shield, breaking the boy’s arm. 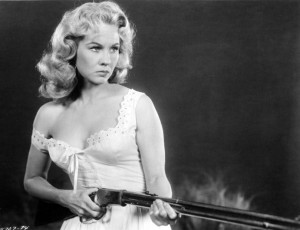 Young widow Ellen (Virginia Mayo) defends herself and her son.

[Spoilers follow.]  Bannon takes Ellen and son back to Bishop’s ranch, where they are doctored by Bishop’s cook Charley (Michael Pate).  Now Bannon knows that Harper plans to use the settlers and Zarata to take over the valley, and Harper and Zarata’s men attack the ranch.  After a protracted siege, Bannon and Bishop use a makeshift smokescreen to allow Bishop’s men to escape from the bunkhouse and get weapons, swinging the battle in their favor.  Bishop gets Zarata but is himself mortally wounded.  Harper is killed.  In the end, Bannon, presumably the new owner of the ranch and the valley, offers to let the wagon train stay and build a town.  Although Ellen reveals that she has a sordid past in St. Louis with no husband (kind of like Anne Baxter in Three Violent People), she and Bannon appear to have a future together.

This is can be hard to find now, since it’s not on DVD, but it is worth watching. The print I saw (on Amazon) was both grainy and inconsistent in color, and it’s obviously in need of restoration. This is one of McCrea’s better westerns from the late 1950s, like Trooper Hook and Gunsight Ridge (both also from 1957).  Notwithstanding McCrea’s age, the fight scenes with Barry Kelley and Michael Ansara are well-staged and persuasive.  Virginia Mayo is also good here, and there is an excellent supporting cast as well.  Leo Gordon and Michael Pate are particularly good. 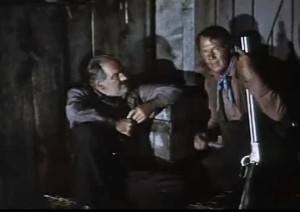 Hardy Bishop (Barry Kelley) and Ned Bannon (Joel McCrea) are besieged by Harper and his minions.

Director Thomas Carr had started as a child actor in silent movies.  He was an extra in John Ford’s The Iron Horse (1924) and became a director of B movies at Republic in the 1940s.  When he made The Tall Stranger, he was near the end of his movie-directing career before going exclusively into television work.  Filmed in color in southern California, at 81 minutes.

Virginia Mayo’s best other westerns are Colorado Territory (1949), also with Joel McCrea, and Fort Dobbs (1958) with Clint Walker, but you can also see her in The Proud Ones (1956) with Robert Ryan, Westbound (1959) with Randolph Scott and in the [inaccurate] Jim Bowie biopic The Iron Mistress (1952) with Alan Ladd. 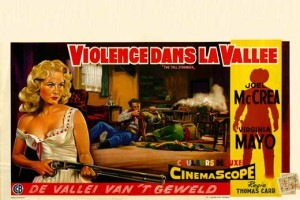