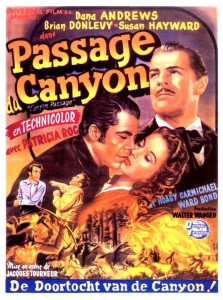 The movie opens in Portland, Oregon, in 1856.  Logan Stuart (Dana Andrews) is a freighter, running strings of pack mules from San Francisco to Portland.  While in Portland, he gets paid $7000 and arranges to take Lucy Overmire (Susan Hayward), fiancée of his friend George Camrose (Brian Donlevy), back to George in Jacksonville in southern Oregon.  He is also attacked by a robber, whom he thinks to be Honey Bragg (Ward Bond) and with whom he has unpleasant history.  The robbery is not successful, and the thief gets away. 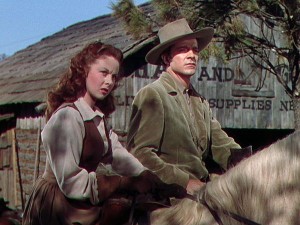 On the way south to Jacksonville, they stop at the ranch of Ben Dance (Andy Devine) and his family, where Caroline Marsh (Patricia Roc) is staying.  Stuart is attracted to Caroline, but he seems also to have a relationship with Lucy.  At a cabin raising, he asks Caroline to marry him and she accepts, although she wants to stay put and is troubled that Logan is so footloose, constantly concentrating on expanding his freighting business.

Arriving at Jacksonville, Stuart fights Bragg and wins.  Lucy has been putting off setting a date for her marriage to George, but plans to go through with it after she goes to San Francisco with Logan to get a wedding dress.  Meanwhile, George is acting as a banker for miners in Jacksonville.  He has also been gambling and losing, and has been covering his losses by stealing from the gold deposited with him.  We see that George is also a man of restless affections, not limited to Lucy.  Eventually George stands accused of murdering one of his depositors for his gold, and Logan helps him escape before he can be hung. 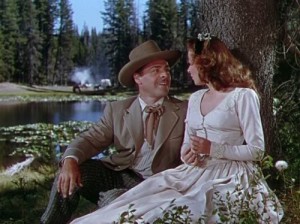 [Spoilers follow.]  As Logan and Lucy head south, they are attacked by Bragg.  They are unhurt, but their horses are killed, and they have to walk back to Jacksonville.  By that time the Jacksonville miners, led by Johnny Steele (Lloyd Bridges), have found and killed George in their absence.  After ambushing Logan, Bragg has also attacked an Indian woman, and now the Indians are torching farms and ranches in retaliation, including Ben Dance’s and Logan’s way stations and general store.  Dance is killed and the Indians are after Caroline Marsh, with Logan and the militia also in pursuit.  The Indians catch Bragg and take care of him, which seems to satisfy them for the moment.  Caroline decides she can’t marry Logan because he won’t settle down in one spot.  So Logan heads to San Francisco again to buy more mules to rebuild his operations.  And Lucy joins him.  They’re better suited to each other than Logan and Caroline were, anyway. 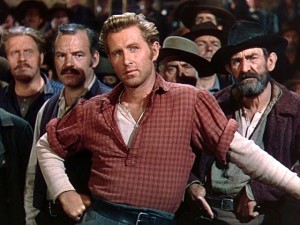 A suspicious Johnny Steele (Lloyd Bridges) speaks for a band of vengeful miners.

Based on a story by Ernest Haycox, this is stuffed full of complicated and not-too-predictable plot and romantic triangles, densely populated with a good cast.  Dana Andrews plays Logan Stuart with the same stoic independence he did Det. Mark MacPherson in Laura.  Susan Hayward, an excellent and often fiery actress, has kind of a generically-written part that doesn’t really allow her to show what she can do.  She’s better in Rawhide [1951] and Garden of Evil [1954], both with meatier roles for her when she had become a bigger star. 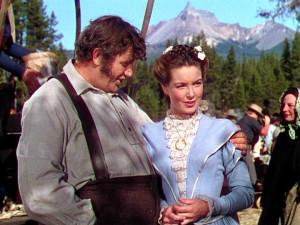 Brian Donlevy didn’t always play villains (see him in Billy the Kid [1941] and Cowboy [1958], for example), but at this stage of his career he’s so identified with bad guys (the corrupt saloon owner Kent in Destry Rides Again and the sadistic Sgt. Markov in Beau Geste, as just two examples from 1939) that we don’t trust him from the start.  The role of George Camrose calls out instead for somebody like Robert Preston, who specialized during the 1940s in friend-gone-bad roles, in which he established himself as charming first.  Ward Bond also has one of his occasional bad guy roles (e.g., The Oklahoma Kid), and he’s very effective.  This has one of Andy Devine’s better roles, too, where he is not used simply as a form of comic relief.  Hoagy Carmichael plays Hi Linnett, supposedly a small merchant, but mostly there to provide musical interludes, as in To Have and Have Not, and to comment on the action.  Carmichael’s song “Ole Buttermilk Sky” got the movie’s only Oscar nomination.  Several of the film’s significant events happen off-camera:  Bragg’s attack on the Indian maiden, the killing of George by the miners’ mob, the killing of Ben Dance by Indians, etc. 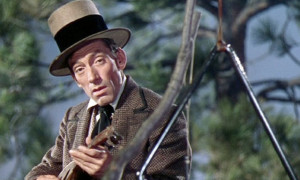 Jacques Tourneur was a good director of westerns, although he wasn’t best known for them in the 1940s.  Later on in the 1950s, he made a few of them (Stars in My Crown, Wichita, etc.) with Joel McCrea.  Ernest Pascal adapted the Haycox story into a screenplay, with some crisp, sometimes even philosophical, dialogue.  Music, except for that provided by Carmichael, is by Frank Skinner.  This was filmed on location in Oregon in color (a rarity for westerns in 1946) by Edward Cronjager, so it must have had a significant budget for its time.  92 minutes.  As of 2020, a nice blu-ray of this is available from Kino Lorber. 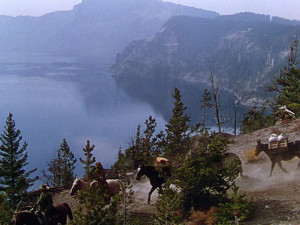