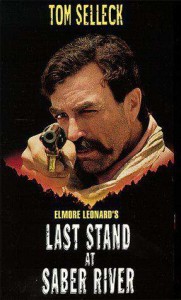 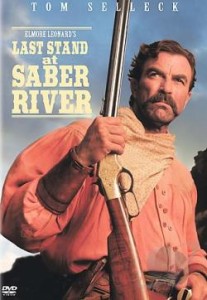 A story from Elmore Leonard is usually a good starting point for a western.  (See, for example, The Tall T, 3:10 to Yuma [original and remake], Hombre, Valdez Is Coming and Joe Kidd.)  In the 1990s and into the early 2000s, Tom Selleck and Sam Elliot appeared in a series of westerns that were initially shown on Ted Turner’s TNT television station, with higher production values than normally seen in that medium.  Often they were based on stories from the heyday of westerns in the 1950s and 1960s by such masters as Leonard and Louis L’Amour, but also on classics by writers like Jack Schaefer (Monte Walsh).  Tom Selleck not only starred, but often took a production role in getting the movie made, as was the case with this Leonard story from the 1950s.

In early 1865 Paul Cable (Tom Selleck; we seldom hear him called anything but “Cable”) is returning from the Civil War, where he has spent four years riding with Confederate cavalry commander Gen. Nathan Bedford Forrest.  There are multiple references to Fort Pillow in Tennessee in 1864, where Forrest and his men committed an atrocity by gunning down more than 300 Union prisoners, most of them black soldiers.  Burned out on the war, Cable just wants to pick up his wife and children in Texas and move back to their ranch in Arizona Territory.  Cable’s wife Martha (Suzy Amis) has spent the interim as a schoolteacher and gunsmith, working with her gunsmith father (Harry Carey, Jr. in his final acting role).  It’s not easy to put the Cable family back together again.  Martha is still traumatized by the death of baby Mary three years ago, by not understanding why (and resenting that) Cable went to fight, by seeing that he’s changed while he’s been away (more willing to kill if necessary) and by being uprooted again.  Frictions in the Cable marriage are one of the basic two conflicts that flow through the story. 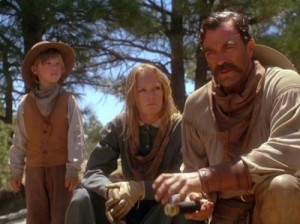 The Cables (Haley Joel Osment, Suzy Amis and Tom Selleck) try to sort things out, now that Paul Cable is home from the war.

The other involves the Kidstons, a family consisting of two brothers Vern (Keith Carradine) and Duane (David Carradine) and Duane’s free-thinking daughter Lorraine (Tracey Needham).  They’re Union sympathizers (Duane had been kicked out of the Union army) who have come to dominate the area while the Cables have been gone.  When the Cables approach their own ranch house, they find it occupied by Kidston men and prostitutes; Martha shoots down two of them when they threaten Cable, and she is appalled that she did it.

Cable is jumped by two brothers of one of the deceased men; he kills one and captures the other, but eventually lets him go.  He takes his family to the general store, where Edward Janroe (David Dukes), a Confederate veteran himself, promises protection for them.  Returning to his cabin, Cable finds Lorraine Kidston there, claiming to have been thrown from her horse.  She makes it obvious he can have a dalliance with her; it is less obvious whether the attraction is real, or she’s just making mischief.  Cable politely resists in any event. 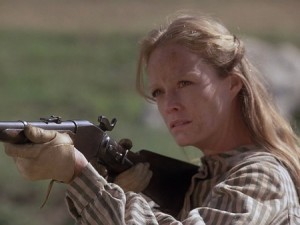 Daughter of a gunsmith, Martha Cable (Suzy Amis) can both make and shoot guns.

[Spoilers follow.]  As news of the end of the war reaches Arizona Territory, Janroe, who has been smuggling British Enfield rifles across the border with Mexico and then sending them east to the Confederate army, volunteers to take the news to Cable.  But Janroe seems to have become unhinged by this development.  Cable is out working, and in his absence Janroe trashes the Cable cabin.  He then stops by the Kidston ranch, and shoots Duane twice, with no witnesses.  Vern Kidston thinks it’s obvious that Cable did it. 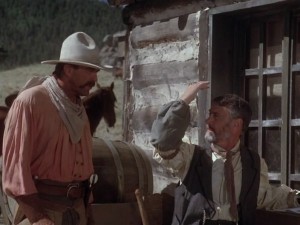 When Kidston and his men besiege Cable at his cabin, he’s rescued by Martha taking out yet another of their gunmen.  Cable and Vern Kidston finally talk and figure out that Janroe didn’t give Cable the news, and that if he was out that way he might have been the one to shoot Duane. Heading for the Janroe store, they find that Janroe has (a) abducted Cable’s daughter Clare (Rachel Duncan), (b) shot Luz (Lumi Cavazos), his Hispanic mistress, when she tried to stop it, and (c) taken his stock of rifles to the Mexican bandits along the border.  Cable and Vern head out in pursuit.  The rescue involves an extended chase, Vern shooting Janroe, Cable rescuing his daughter from a runaway wagon, and finally Cable fighting off the bandits and taking a wound himself.  Back at the Cable cabin, indications are that there will be peace with the remaining Kidstons and perhaps between Cable and Martha. 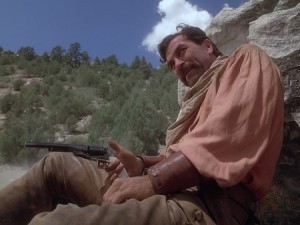 Cable (Tom Selleck) is pinned down in the rocks by superior numbers.

Selleck was usually good in these high-quality made-for-television westerns, almost single-handedly bringing back the big hat that was more or less authentic to the time of the story.  (Perhaps the best example of a Selleck hat is in Quigley Down Under, which was not made for television.)  Both Suzy Amis (near the end of her acting career at only 35) and Tracey Needham have strong female roles well-integrated with the story (unusual for a western); Amis’ character is both harder-edged and more sympathetic.  David Dukes makes an effective fanatical one-armed villain.  Rachel Duncan and Haley Joel Osment as the Cable children are unusually effective, too. The Carradine brothers most famously starred together in Walter Hill’s The Long Riders (1980) as two of the Younger brothers, but you can also see them together in The Outsider (2002), another made-for-television western. 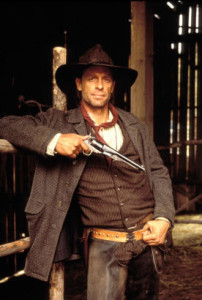 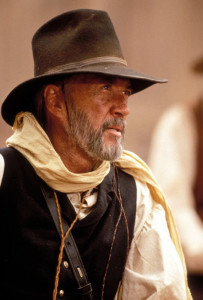 Dick Lowry was a long-time television director, who also worked with Selleck on one of his Jesse Stone police procedurals in 2011.  This was shot in New Mexico, around Santa Fe, in color at 96 minutes.