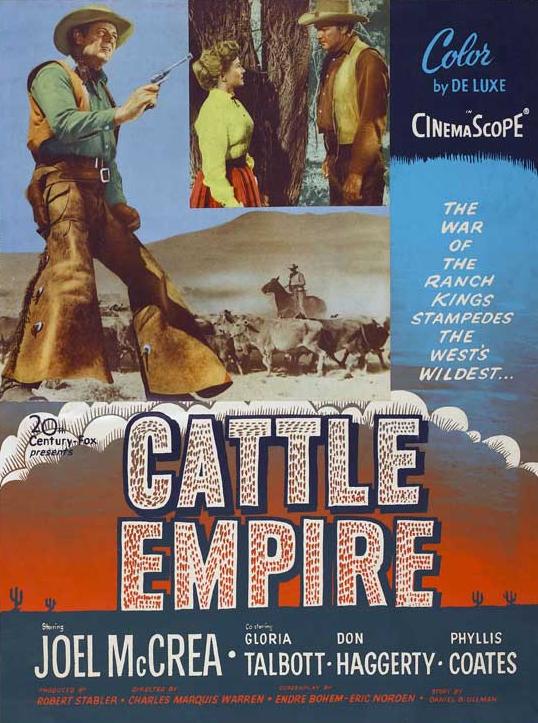 In the opening scenes of this late Joel McCrea cattle drive story, John Cord (McCrea) is being dragged through the streets of Hamilton by irate citizens as, bit by bit, his backstory emerges.  He has been just let out of Yuma Territorial Prison in Arizona after serving a five-year sentence.  An experienced trail boss, his men had gotten out of control and trashed Hamilton, resulting in extensive property destruction and a few deaths.  Cord himself had ended it in a brawl with local cattle baron Ralph Hamilton (Don Haggerty), from which Hamilton had emerged blind but married to Cord’s one-time fiancée Janice (Phyllis Coates) after Cord had been sent off to prison.

Now Hamilton has sent for Cord for his trail boss skills, at a time when Cord has few other choices. The town has never recovered and is on the verge of blowing away in a drought.  Hamilton thinks Cord is tough enough to get a combined local herd of 4000 cattle to market at Ft. Clemson, at a time when water is even harder than usual to find.  They have to get there first to win an army contract.  There’s also a rival herd managed by another cattle baron Garth (Richard Shannon), which Cord also agrees to lead.  It’s not clear what Cord’s game is, other than various unresolved feelings of revenge—against Ralph Hamilton, Janice Hamilton and various of the townsfolk.  Aside from Ralph Hamilton, the only citizens who treat Cord decently are the aging brothers George Washington Jeffrey (Hal K. Dawson) and Thomas Jefferson Jeffrey (Paul Brinegar), who join the trail drive along with G.W.’s granddaughter Sandy (Gloria Talbott) and a number of other more or less resentful cattlemen.

John Cord (Joel McCrea) drinks with the Jeffrey brothers (Hal Dawson and Paul Brinegar), two of the few friends he has left in town.

As matters get sorted out, Cord drops out of Garth’s drive, telling him to head for Horsethief Creek because there’s no water at the Dismal River.  Garth suspects that Cord is now trying to distract him and heads for the Dismal; in fact, Cord has been straight with Garth and is taking the Hamilton herd to Horsethief Creek.  Slowly relations with the Hamiltons and the townsfolk develop.  Hamilton offers Cord his ranch and cattle empire (and even Janice, by implication) for getting them through.  Janice in some ways regrets her faithlessness to Cord, and it is unclear how far matters between them go before the ultimate resolution.  It looks like they go quite a way, which was unusual for both a 1950s western and for a Joel McCrea character.  Sandy evinces some romantic interest in Cord, even though he seems significantly too old for her.

Needless to say, Cord gets the herd through.  [Spoilers follow.]  But Garth, thinking Cord was trying to slow down his herd, went to the DIsmal River and lost his herd.  He has now hired gunhands to take away the Hamilton herd at Indian Pass, before they can get to Fort Clemson.  Ralph Hamilton confesses that five years ago, when Cord beat his herd to market, it was he who had turned Cord’s hands loose on the town and started the fight with Cord.  Now Cord has to save the herd from Garth’s gunmen and shoot it out in traditional fashion with Garth himself.  As he leaves, it seems that rather than taking Ralph’s offer Cord will head for new ground in the northwest… and will come back for Sandy.

It takes a tough trail boss (Joel McCrea) to get the herd to market.

Director Charles Marquis Warren was known more for his screenwriting than for his directorial abilities, although he did direct a few other westerns, of which Trooper Hook (also starring McCrea) and 1956’s Tension at Table Rock (with Richard Egan) are probably the best.  He then moved almost entirely into television work.  That this is worth watching at all is due almost entirely to Joel McCrea, who’s a little more morally evasive than normal for him; otherwise the writing is undistinguished and the acting (other than McCrea) is unremarkable.  The romantic triangle between McCrea, Coates and Talbott is interesting but seems at least partially unresolved.  As noted before, the McCrea-Talbott age difference is obviously significant, but, like Gary Cooper and John Wayne, Joel McCrea could make it work out believably.  The story seems unbalanced, with a lot of development of the various Cord-Hamilton-citizenry resentments and motivations and not enough of the actual arduous drive.  It might have benefited from another 12-20 minutes of cattle drive, if it was done well.  The film obviously utilizes a lot of stock footage during the cattle drive. 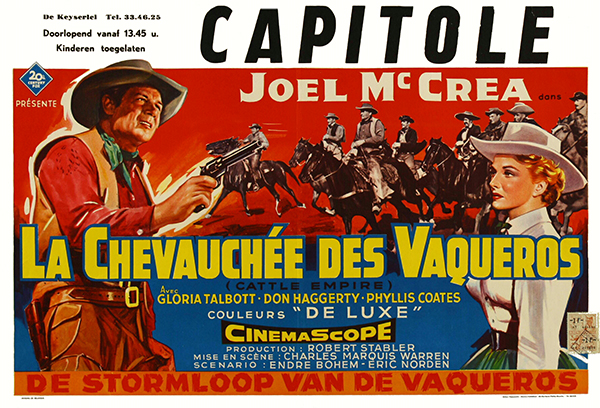 The geography of the film is a little hazy.  Cord had been in prison at Yuma, making it seem like Arizona Territory.  But there are also references to the Staked Plains and to arriving at the Pecos, which sounds like maybe Texas-New Mexico.  Fort Clemson, the ultimate destination of the drive, is apparently fictional.  Fans of cattle drive westerns will note that there are several of the standard vicissitudes of trail drives missing here:  no stampedes with related deaths, no bad storms and bad weather interludes, no Indian raids and such.  That’s one reason the drive itself seems a bit light.  McCrea gives a speech about how the hardest part of the drive is coming up between them and Horsethief Creek, and, with the next scene cut, the herd’s at Horsethief Creek without any of the hard going.  It’s not the best of late McCrea westerns, but he makes it worth watching.  Not to be confused with Cattle Drive, another McCrea cattle drive western from earlier in the 1950s.  For the greatest of cattle drive westerns, see Lonesome Dove and Red River.

Shot in color in the Alabama Hills around Lone Pine, at 83 minutes.  This is not often seen these days, since it’s not available on DVD in the United States.  The year following this film, three members of the cast (Paul Brinegar, Steve Raines and Rocky Shahan) joined the television trail drive western Rawhide, with Eric Fleming as trail boss Gill Favor, a young Clint Eastwood as segundo Rowdy Yates, and writer-producer Charles Marquis Warren in control of the series.