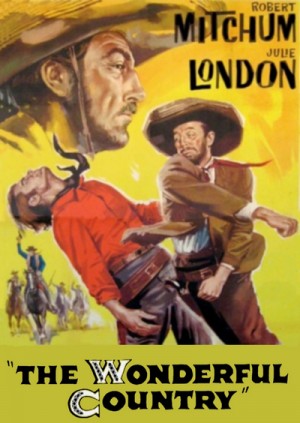 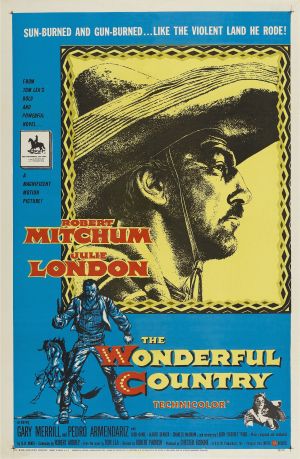 In the 1950s, Julie London was known primarily as a sultry singer, but she also made three westerns:  Saddle the Wind (1958), with Robert Taylor; Man of the West (1958), with Gary Cooper; and this one with Robert Mitchum.  The story involves another of Robert Mitchum’s adventures in Mexico (e.g. Bandido and The Wrath of God), or rather back and forth between Mexico and the U.S., as he tries to sort out his loyalties.

Mitchum plays Martin Brady, an American who has long been working in Mexico as a pistolero for the Castro family—specifically for Cipriano Castro.  As the movie opens, he is delivering silver pesos to a German merchant named Sterner across the Rio Grande.  In a dusty border town on the U.S. side, his horse (a big black Andalusian stallion named Lágrimas—Spanish for “tears”) is spooked and throws him, breaking his leg.  As he is laid up for two months, he makes a number of acquaintances, most of whom have their own agendas for him.  And he begins to feel that he’d like to stay on the U.S. side. 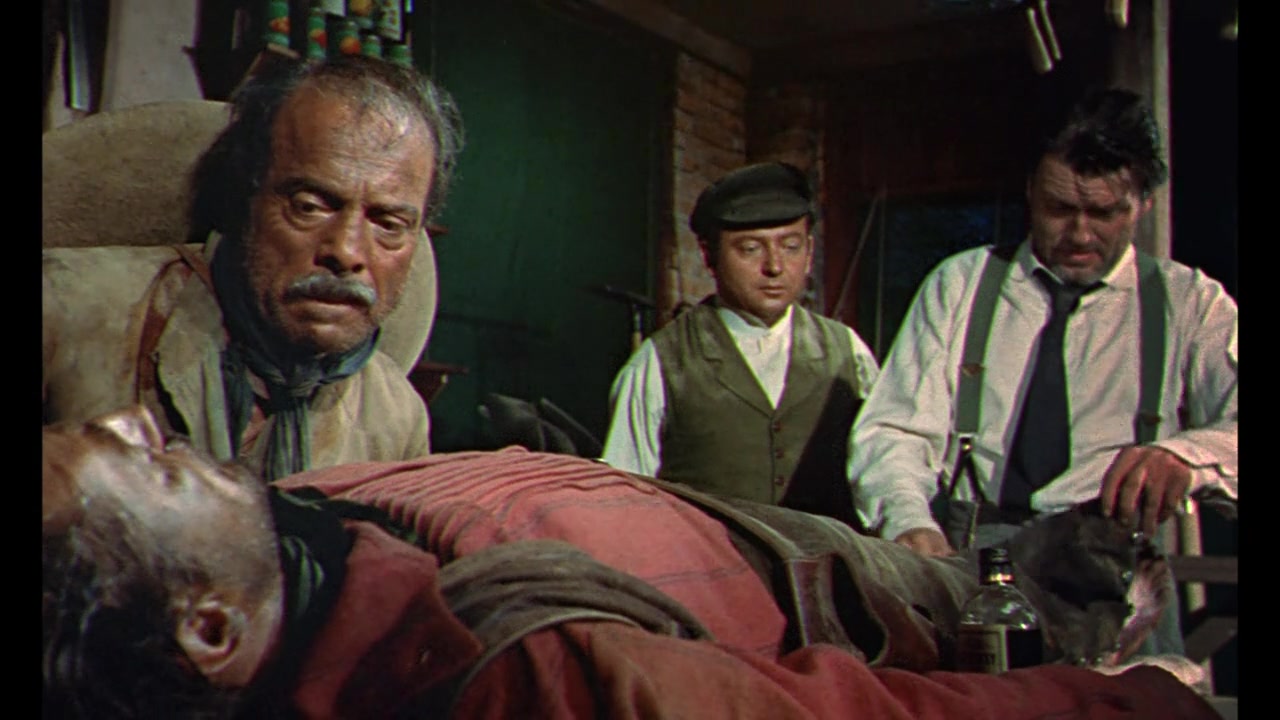 Brady initially fled Texas when his father was killed, and he in turn shot the killer.  But the local Texas Ranger authority (Albert Dekker), who would like to recruit him as a ranger, tells him that it was long ago now, and that most who know about it think he did a good thing.  The military commander at Fort Jefflin, Major Stark Colton (Gary Merrill), wants to form a joint venture with the Castros to hunt the Apaches who strike back and forth across the border.  Mrs. Helen Colton obviously hasn’t much attraction to her own husband, and Brady hears scuttlebutt about her affairs in Missouri.  As he thinks about staying, he attends a social gathering at the fort.  While he’s avoiding becoming involved with Mrs. Colton, a hardcase (played by Chuck Roberson, John Wayne’s favorite stand-in) picks a fight with a German friend of Brady’s and Brady is forced to kill him.

He then flees south of the border, where he finds that he is in trouble because the guns never made it back to the Castros while Brady was laid up.  Cipriano Castro (Pedro Armendariz) is now the governor in the capital city, but the Castro brothers no longer trust each other.  As Major Colton visits the capital and forms an alliance with Cipriano, Brady dallies with Mrs. Colton but is interrupted when Cipriano orders him to kill the other Castro brother—the general Marcos (Victor Mendoza).  Brady refuses and flees the city, but now neither Cipriano nor Marcos trusts him.  He flees north, with his pursuit being led astray by a friend. 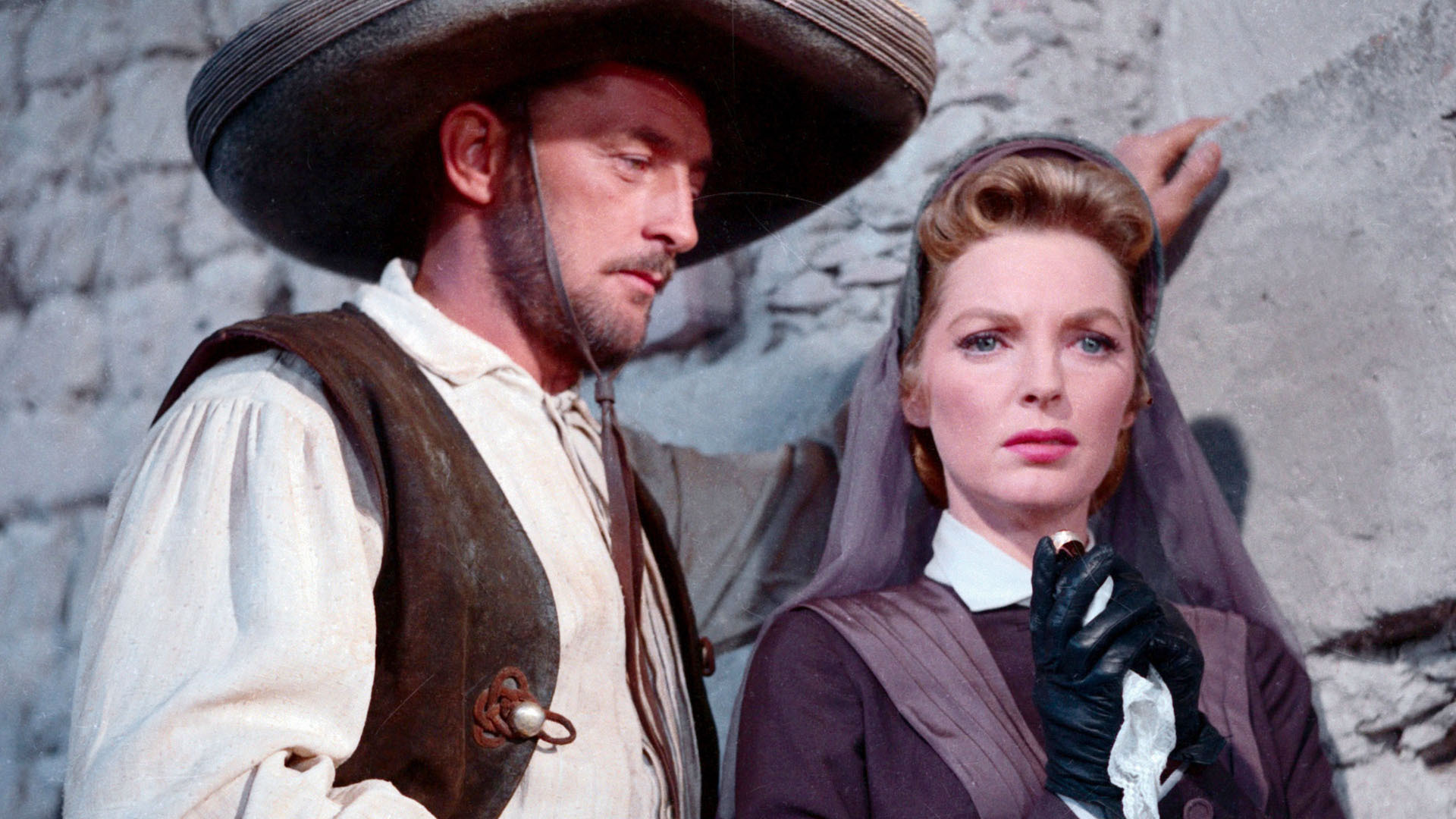 Martin Brady (Robert Mitchum) and the major’s wife (Julie London) try to come to terms with their mutual attraction.

The American force is now 100 miles deep in Mexico, but Marcos succeeds in assassinating his brother and repudiates the alliance.  Major Colton is mortally wounded in an encounter with Apaches, but Brady manages to retrieve the stolen wagon of rifles.  Colton dies, and Mrs. Colton tells Brady that if he wants her he’ll have to find her in the U.S.  Nearing the Rio Grande, Lágrimas is shot by a pursuer sent by Marcos Castro.  Brady kills the pursuer, but is forced to shoot Lágrimas as well, symbolic of killing his past life.  He leaves his sombrero and gun by the horse’s body and heads across the Rio Grande.

Some have referred to this as an “existential western,” as Brady tries to figure out where he belongs, if anywhere.  Based on a novel by Tom Lea (who has a cameo as a barber), the story is slow developing in its first half but picks up speed as Brady returns to Mexico.  At only 98 minutes, some of the characters and their competing agendas seem underdeveloped.  Mrs. Colton herself doesn’t really come alive as a character, as she might have with a little more development.  Without having read the novel, I’m guessing it probably works a little better than the movie in some respects.  Robert Mitchum, in his world-weary mode, is the primary reason to watch this movie, although it’s fun to see baseball pitcher Satchel Paige in his only movie role as a buffalo soldier sergeant.  Mitchum was also the executive producer. 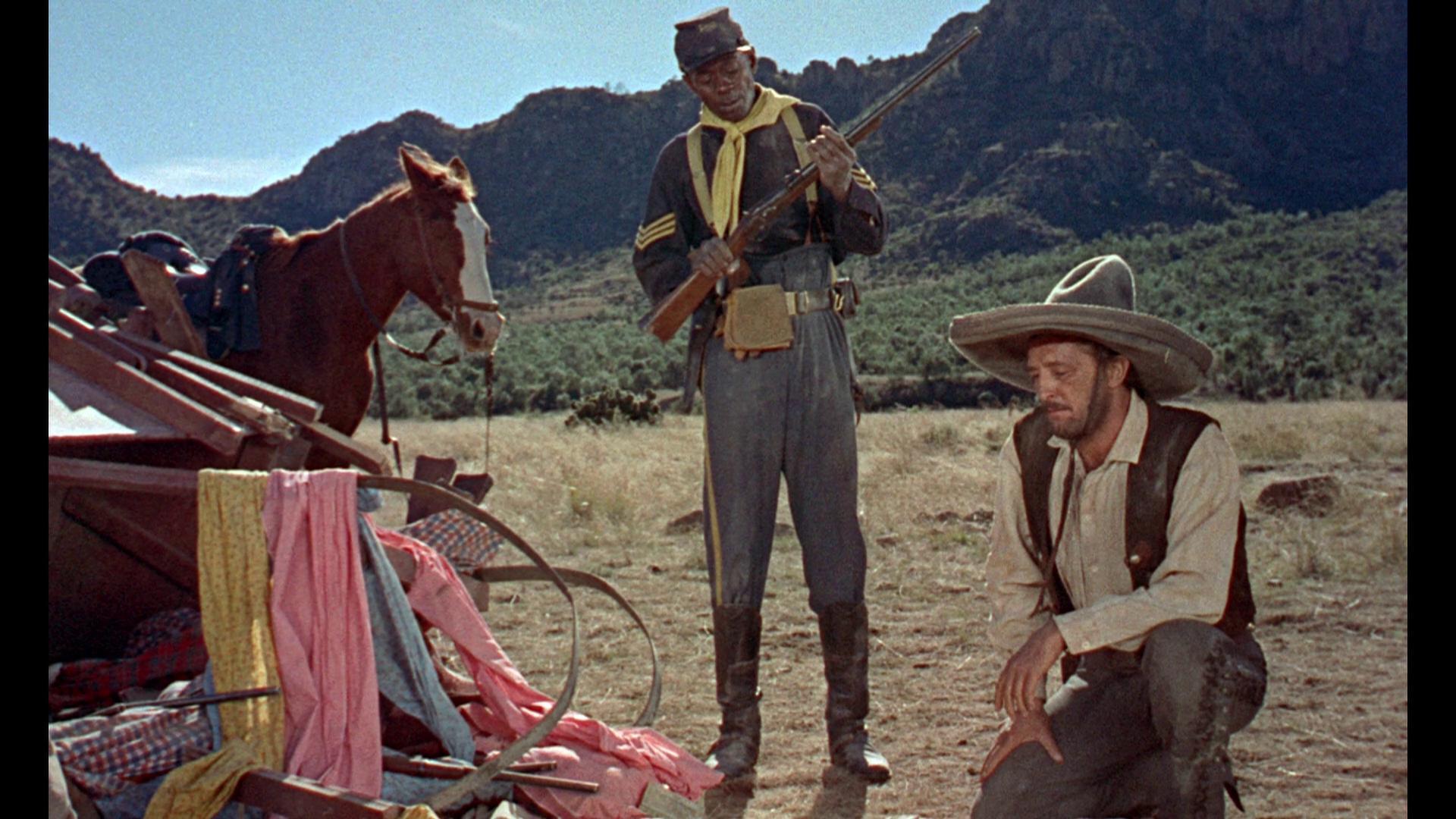 Shot in color on location in Durango and Guanajuato, Mexico, the movie looks good, especially in a high definition print.  Director Parrish also did Saddle the Wind, but his career was nothing remarkable.  The “wonderful country” of the title is presumably Mexico—wonderful, perhaps, but dangerous.