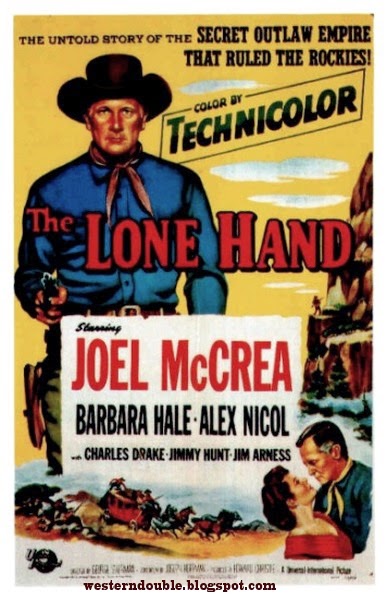 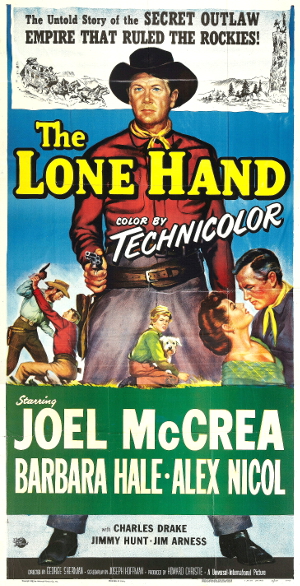 In 1870, widower Zachary Hallock (Joel McCrea) and his young son Joshua (Jimmy Hunt) come to the town of Timberline, looking for a new start.  They buy a ranch at a good price and set about fixing it up, making friends with the Skaggs family, especially marriageable daughter Sarah Jean (Barbara Hale) and her young brother Daniel.  As their first harvest comes in, they buy a couple of riding horses from amiable horse trader George Hadley (Charles Drake) for a wagon load of grain.  Zachary and Sarah Jean are married, and she moves in.

Timberline is also plagued by a band of outlaws.  As Joshua is delivering the grain to Hadley, shots from ambush spook his horse and the grain is dumped into a creek and lost.  The slippery-seeming Varden brothers (Alex Nicol and James Arness) approach Zachary with an invitation to join them in a robbery.  They refer to a shadowy big boss, who gives them the information on which their robberies are planned.  It works out profitably enough, but Sarah Jean and Joshua wonder about Zachary’s unexplained absences on more jobs.  As Joshua follows Zachary, he is spotted by one of the Vardens (James Arness), who traps Joshua by the river until Varden slips, falls in and is drowned. 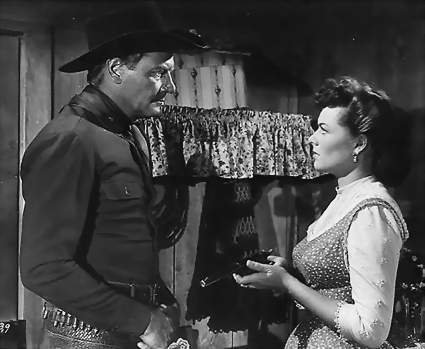 Zachary is to bring the mules up for a final big score (robbery of a mule train of gold), where he meets the big boss:  George Hadley, the horse trader and head of the local regulators.  As Zachary is captured, he is rescued, and the robbery is thwarted by the Timberline regulators, alerted by Sarah Jean.  It turns out that Zachary was a Pinkerton agent and was undercover with the gang until he could identify the real leader.  And now he, Sarah Jean and Joshua can live happily ever after.

Among Joel McCrea westerns of the early 1950s, this obscure one is not one of the most effective. It depends on a gimmick, with the movie being mostly narrated by Joshua from a position of partial ignorance.  Although the movie is not long (just 80 minutes), the gimmick is worn out before it is done.  Barbara Hale is competent and pleasant to look at, but not terribly charismatic.  (See her also as Randolph Scott’s fiancée in 7th Cavalry.)  Alex Nicol, who plays the surviving Varden brother, is a better and more interesting bad guy in both Dawn at Socorro and The Man From Laramie.  The river into which James Arness falls to his death is the same one (the Las Animas) used to good effect in Butch Cassidy and the Sundance Kid.  Charles Drake is so smooth and amiable as George Hadley that we know he must be the leader of the outlaws, so that development isn’t really much of a surprise.  If you are a particular fan of Joel McCrea (and I am), you may want to see this for the sake of completeness.  Although it’s pleasant enough fare, it may not be worth seeking out otherwise.  For other McCrea westerns from this period particularly featuring him in a parental role, see Saddle Tramp and Cattle Drive. 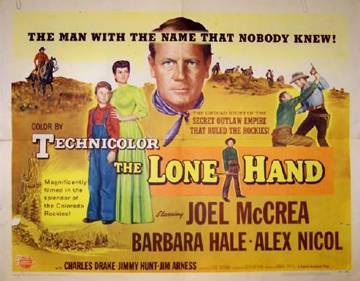 George Sherman was a journeyman director who moved more into television work in the later 1950s and 1960s.  He made quite a few westerns of which his best may be a late one:  Big Jake (1971) with John Wayne.  Story is by Irving Ravetch.  Shot in color around Durango and Moses Lake, Colorado, with good cinematography and excellent scenery.  Cinematography is by Maury Gertsman and music by Joseph Gershenson and Henry Mancini (uncredited).