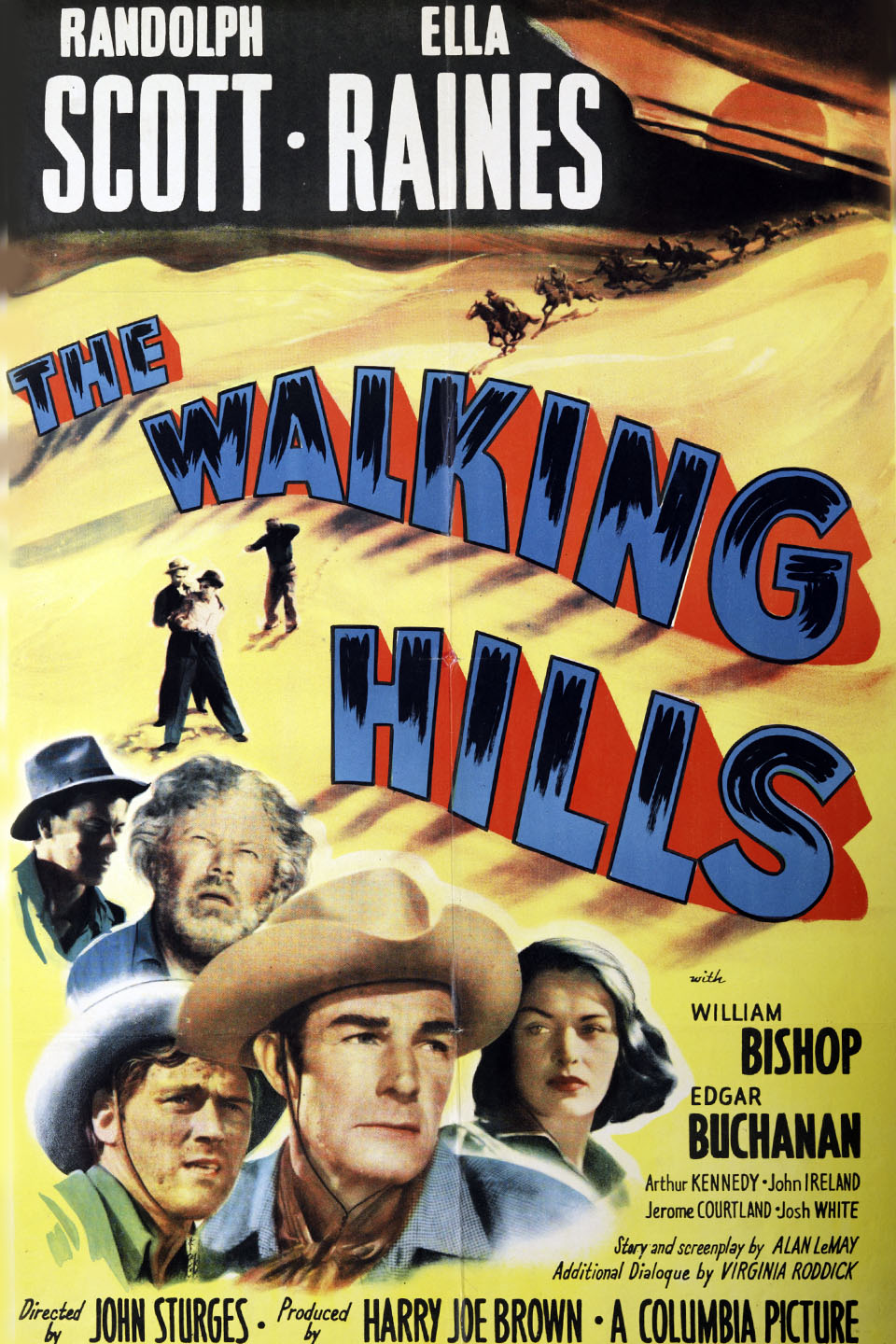 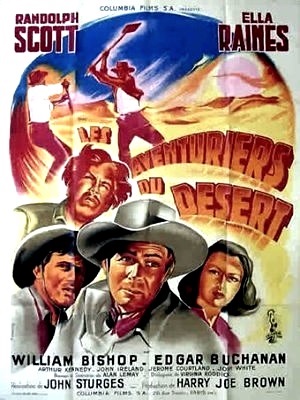 The enigmatic title of this treasure-hunting noir western set in modern times (ca. 1950) refers to a large area of dunes that move around in strong winds.  An 1852 wagon train supposed to have been full of gold was been lost there, and in a back room card game in Calexico, young Johnny (Jerome Courtland) refers to having seen what might be a line of wagons out in the sand.  Old Willy (grizzled former dentist Edgar Buchanan) supplies the legend, and it is determined that everybody in the room must go, lest anybody staying behind later follow with his own search party and cut them out.

They are soon joined by Chris Jackson (Ella Raines), who works at a local lunch counter and has romantic history with two members of the group.  Aside from Old Willy, the most experienced hand is Jim Carey (Randolph Scott), a rancher and horse breeder, who brings along a mare he expects to foal at any time.  He supplies the expedition with horses, wrangled by his Indian hand Cleve (Charles Stevens).  Chris and Jim were a romantic item before she left him for rodeo rider/gambler Shep/Dave (William Bishop).  Shep in turn abandoned her in the rain in Denver. 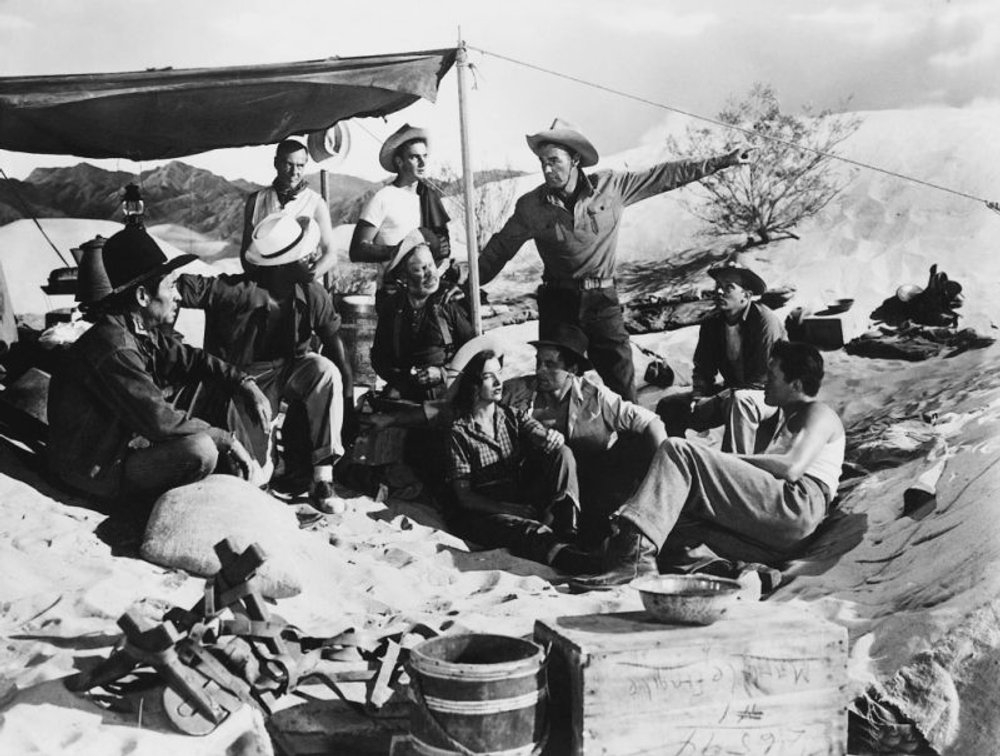 Jim Carey (Randolph Scott) is the center, figuratively and visually, of the group of gold hunters.

Frazee (John Ireland) is a private detective who was pursuing Shep but is now more interested in gold.  He has a gun and a heliograph, with which he signals a confederate in the foothills.  Bits of backstory are told in flashback, such as the fact that Shep had been in a card game in Denver that resulted in an accidental death, for which he is now wanted by the law.  That’s why he left Chris in Denver.  Johnny sees Frazee burying something and jumps him; he is shot by Frazee and initially thought to be paralyzed.  Chris insists that Jim get Johnny to a doctor, but Jim can’t leave his mare and thinks that Johnny won’t make it anyway.  He doesn’t, although he supplies a couple more bits of information before his demise.

[Spoilers follow.]  Old Willy discovers a wagon, giving the group new energy.  But there’s no gold in the wagon, and the band is hit by a sand storm, during which Frazee battles Shep, Chalk (Arthur Kennedy) and Jim with shovels and fists before Chalk shoots Frazee with his own gun.  Jim scrambles to round up the scattered horses in the storm, while the others seek cover.  When the storm passes, the wagon train stands revealed, but with no gold.  Shep takes off to turn himself in and sort things out; Jim gives Chris one of the few remaining horses to follow him.  And he forces Old Willy to reveal that he has in fact found $10,000 in gold, which he will have to split with the survivors.  Jim takes the remaining horse and the new foal, saying that he will send horses for them. 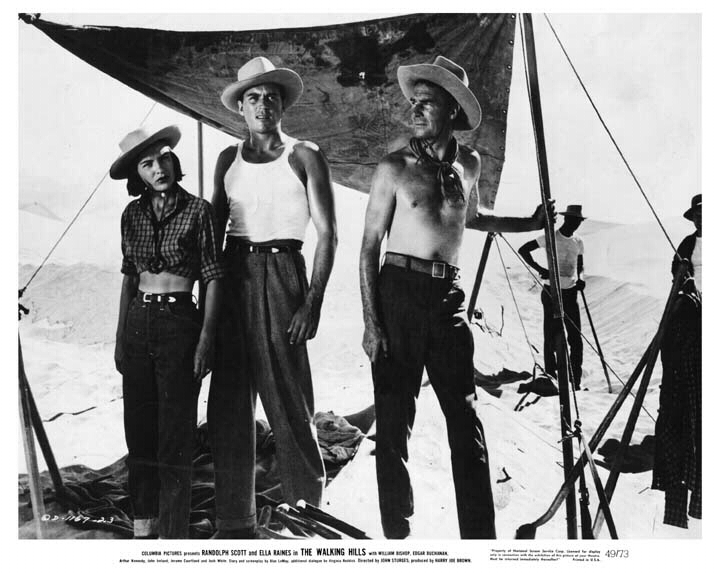 The cast is very good.  Randolph Scott was the biggest star at the time, and he is the moral center of the movie, although he doesn’t seem all that moral at the start.  He’s in good physical shape for a man in his 50s, as his shirtless scenes remind us (for more of those, see him in Carson City).  His strong, taciturn role here reminds us of his work ten years later with director Budd Boetticher.  Sultry Ella Raines is good as Chris; this may have been the peak of her modest movie career, though.  John Ireland was also at the early peak of his long movie and television career following Red River, My Darling Clementine and I Shot Jesse James and before All the King’s Men.  Look for Scott and Ireland together again the same year in The Doolins of Oklahoma, a more conventional western.  William Bishop was fine in this, but did not have a particularly notable career before his early death at 41.  Arthur Kennedy doesn’t have much to do or much camera time.  For Edgar Buchanan in another role as a grizzled gold seeker about this time, see him with Glenn Ford in Lust for Gold. Geronimo’s grandson Charles Stevens gets more screen time here than he usually did, and he looks authentic. 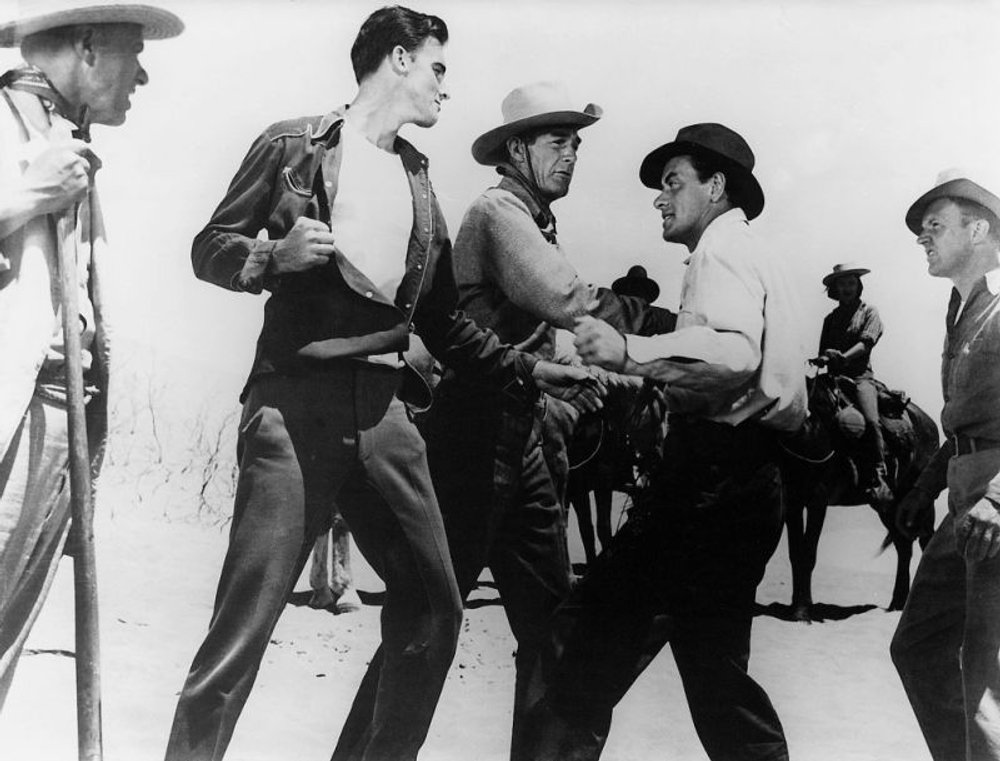 Surprisingly for a relatively short film, this includes a couple of musical interludes by bluesman Josh Smith.  Note the camera angles used by director Sturges during those interludes to provide visual interest and prevent things from becoming too static during the songs.  The birth of a foal in the desert provides a symbol of hope and renewal when things are going badly.

The classic Treasure of the Sierra Madre had come out the previous year (1948), and this was obviously influenced by the success of that film.  It was shot in Death Valley and Lone Pine in beautiful black and white by Charles Lawton, Jr., who later worked with producer Harry Joe Brown and Randolph Scott several more times on the Boetticher westerns.  The sandstorm scenes are particularly effective.  He also worked with eminent western directors Delmer Daves, including the marvelously shot 3:10 to Yuma, and John Ford. 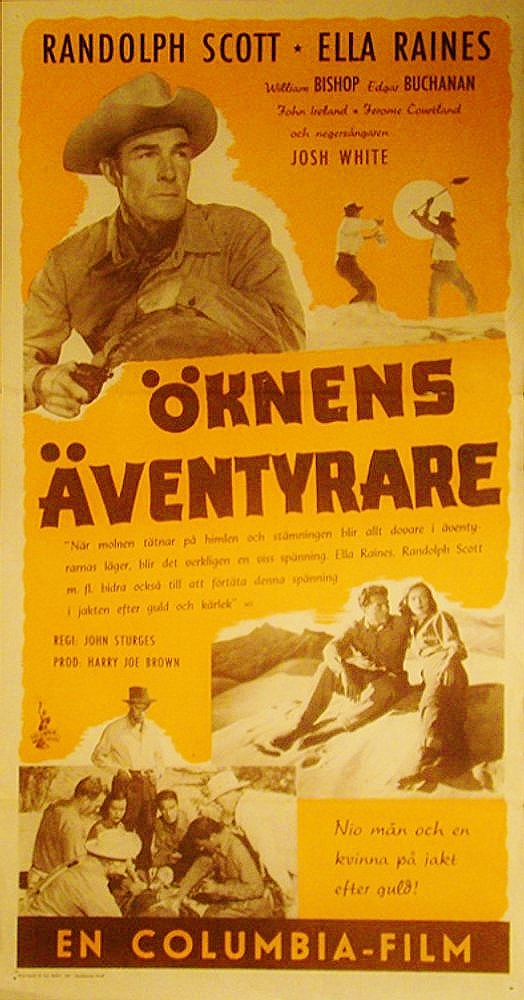 At a compact 78 minutes, much is revealed by flashback, but not everything.  The story is left with a few holes in it, and that appears to be by design.  Story and screenplay are by Alan LeMay (Gunfighters, San Antonio, Rocky Mountain, novels for The Searchers and The Unforgiven).  This is from early in the career of excellent director John Sturges (Escape from Fort Bravo, Bad Day at Black Rock, Last Train from Gun Hill, The Magnificent Seven, Hour of the Gun et al.).  It is not as polished as some of his later work, but it is well worth watching (and even re-watching), although it can be hard to find