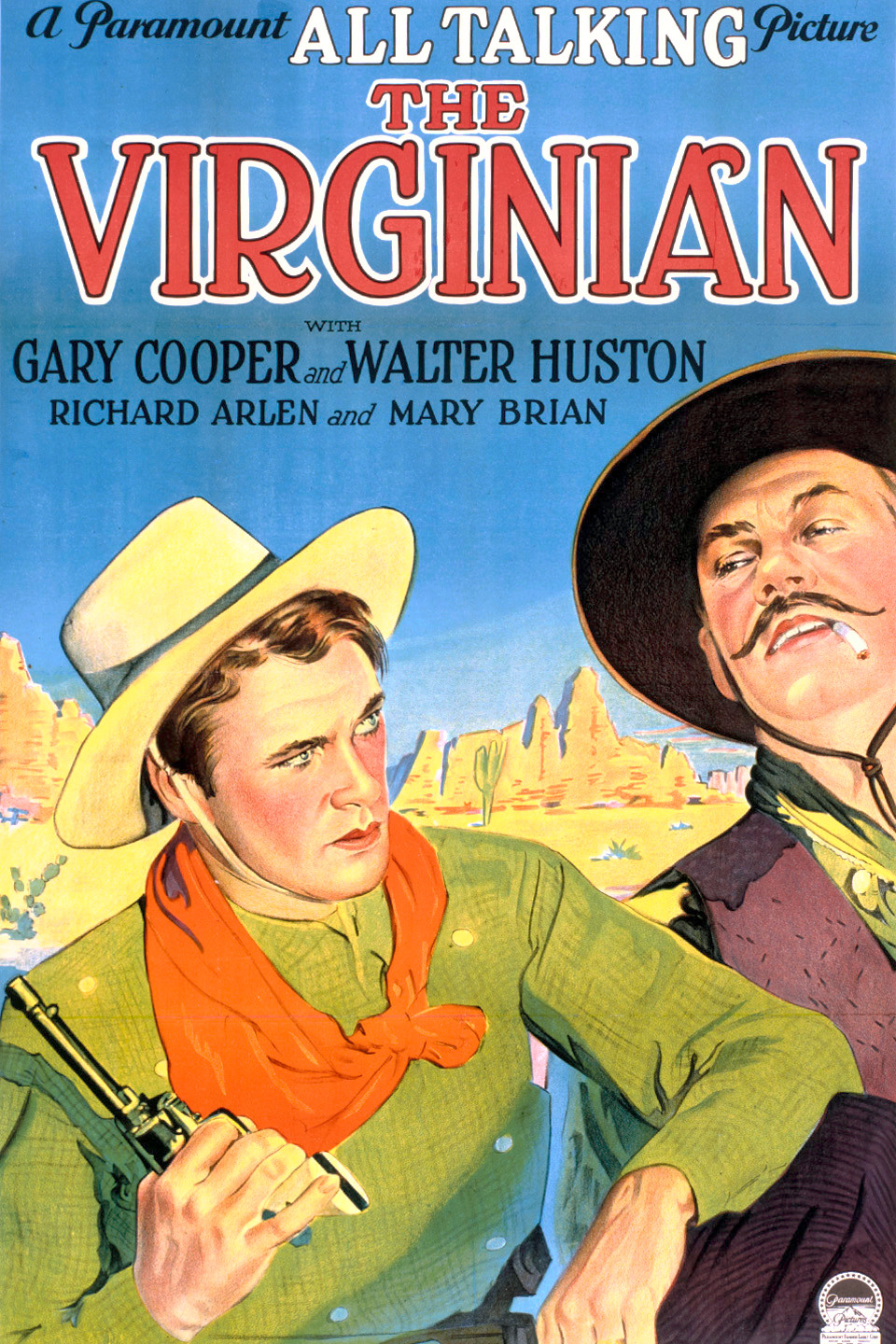 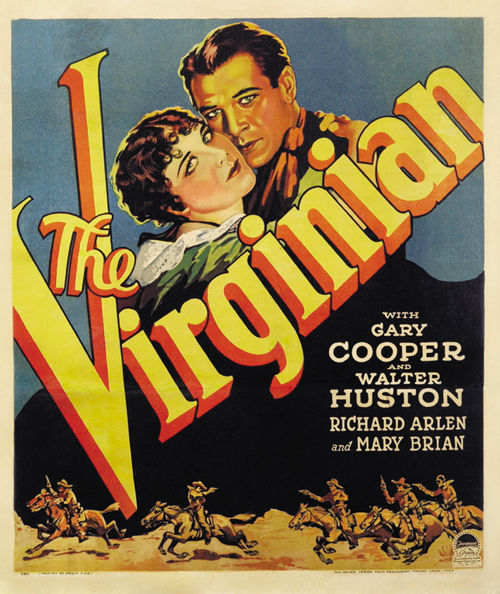 This early talkie version of Owen Wister’s oft-refilmed 1902 western novel provides Gary Cooper with one of his signature roles in westerns, along with perhaps The Plainsman and High Noon.  At 28, he had been appearing in movies for about five years, many of them westerns.  And he had broken through to initial stardom with his role in The Winning of Barbara Worth (1926), a western of sorts.  A lanky native of Montana, he proved to be a natural in westerns, starring in many of them for the rest of his career.  Although the tale seems old-fashioned now and provides the basis for some of the oldest clichés in westerns, many think this 1929 film is the best version of the story on film.  It was also the first major sound film to be shot outdoors, made on location in Sonora, California.

Most fans of westerns will be familiar with the outlines of the story.  Beautiful young Molly Stark Wood from Vermont comes west to Wyoming Territory to teach at a remote school.  The biggest rancher in the vicinity is Judge Henry, but despite his title there is little law in the territory.  Molly (Mary Brian) meets Judge Henry’s foreman, known only as the Virginian (Gary Cooper), and his sunny-tempered friend Steve (Richard Arlen).  Originally put off by the Virginian’s informality, Molly nevertheless develops an affection for him. 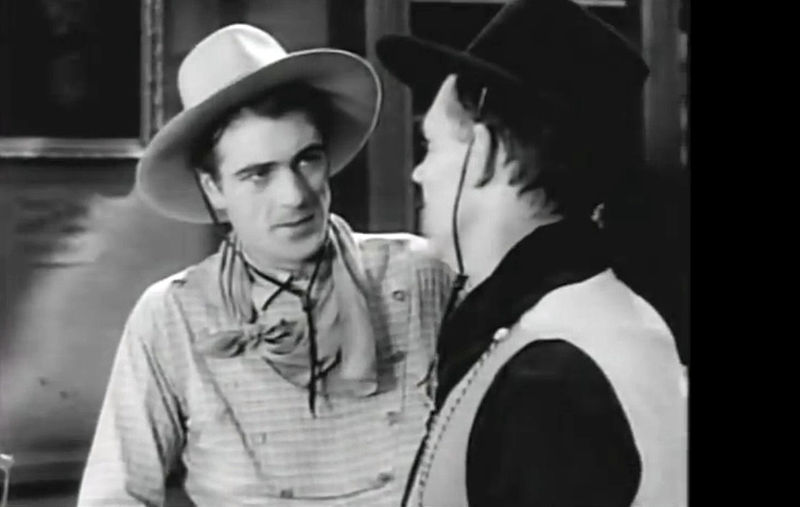 The Virginian (Gary Cooper) and Trampas (Walter Huston): “If you want to call me that, smile.”

That affection is tested twice.  In the first instance, Steve is corrupted by the rustler Trampas (Walter Huston).  When Judge Henry’s riders capture three of Trampas’ rustlers red-handed, one of them turns out to be Steve.  According to the rules of the time, they are all hanged, and the Virginian takes after Trampas.  As he tracks the rustler chief, Trampas shoots him in the back from ambush.  The Virginian’s horse takes him to the school, and Molly nurses him back to health, only to be horrified when she learns that he led those who hanged his friend Steve.

They manage to get past that, but on their wedding day in Medicine Bow, Trampas shows up in town and orders the Virginian out of town by sundown.  He actually says that the town isn’t big enough for both of them.  Molly tries ineffectively to talk her man out of doing what we all know he has to do.  As the sun goes down, Trampas shoots first, again from ambush, and the Virginian returns fire in a classic street shootout.  As the Virginian returns to Molly at their hotel, they fall into each other’s arms and the film ends. 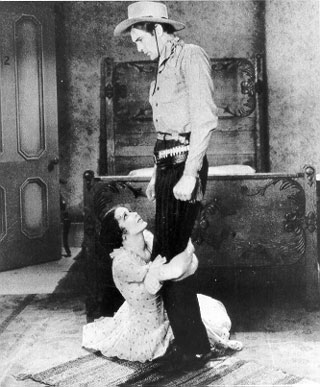 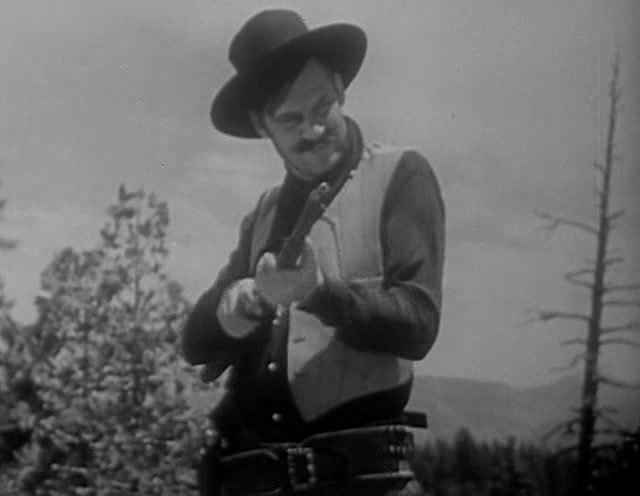 Molly (Mary Brian) reasons with the Virginian, to no avail.  And Trampas (Walter Huston) shoots the Virginian in the back from ambush.

The production seems a bit stilted by today’s standards, and the makeup (especially on Brian and Cooper) is clearly of the 1920s.  But this is still a very good western.  There has probably never been a better Virginian on film than the young Cooper, and the film made Cooper a bigger star.  This was his second talking western, after Wolf Song, also directed by Fleming.  He reportedly had trouble remembering his lines, now that he actually had to say lines.  The most difficult part in this story is usually that of Molly, who can easily seem priggish and overly Victorian to current audiences.  Mary Brian is adequate and sometimes spirited in her way, especially when compared with, say, Barbara Britton from the 1946 film version with Joel McCrea.

The supporting cast is very good, too.  Richard Arlen is good at showing Steve’s good nature and making him sympathetic as he falls under Trampas’ sway.  At the time this was made, Walter Huston was better known than Cooper, mostly from working on Broadway; he was paid $20,000 to Cooper’s $3,400.  (Director Victor Fleming was paid $75,000, so we know who had the real clout here.  A prominent director since 1919, Fleming, of course, was connected with some of the best-remembered films of the 1930s and into the 1940s, such as Captains Courageous, The Wizard of Oz, Gone With the Wind and A Guy Named Joe—hardly any of them westerns.)

Rotund, gravel-voiced Eugene Pallette is one of the Virginian’s principal supporters in the film.  You’ll recognize him from the later Errol Flynn version of Robin Hood and the Tyrone Power version of The Mark of Zorro.  Silent comedian Chester Conklin makes a fleeting appearance.  Geronimo’s grandson Charles Stevens is in the cast as a Mexican.  North Carolina native Randolph Scott worked on the film as a dialect coach teaching Cooper how to speak as if he were from Virginia, and in a brief non-speaking part early in his career.  There had been earlier silent versions of the story in 1914 and 1923, but this one is better.  The film is in black and white, at 91 minutes. 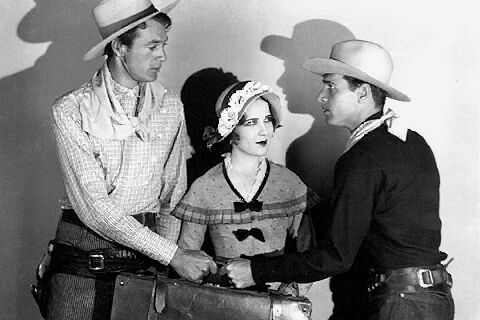 Initially Molly (Mary Brian) is torn between the Virginian (Gary Cooper, left) and his pal Steve (Richard Arlen, right), but she chooses well.

This is probably one of the three foundational westerns from the 1920s.  If you want to see how many of the tropes, archetypes and lore of the modern western were developed, watch The Covered Wagon, The Iron Horse and this.  If you want to watch Cooper in another western from the early talking-movies stage of his career, try Fighting Caravans (1931).  If you want to watch another version of The Virginian for purposes of comparison, try Bill Pullman’s television version from 2000 with Diane Lane, which tries to make the language and situations more relatable to modern audiences, with some success.  The 1946 remake with Joel McCrea, Barbara Britton and Brian Donlevy is less successful.

This can be very difficult to find, since it’s not available on DVD.  Sometimes you can catch it on TCM or on the Starz Encore Westerns channel, and it’s said to be on YouTube.