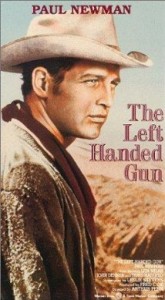 This anguished retelling of the Billy the Kid story, with overwrought psychological overtones, was the directing debut of Arthur Penn and the first film for producer Fred Coe.  It depicts the usual events (e.g., the killing of John Tunstall, Billy’s English employer, and Billy’s escape from jail and killing of deputy Bob Ollinger [Denver Pyle]) without sticking very closely to the historical details.  .

Paul Newman conveys Billy’s immaturity and poor impulse control, although at 33 he was not as young as Billy was and certainly doesn’t look much like him.  James Dean was originally signed for this role but didn’t live to play Billy.  The script emphasizes Billy’s illiteracy and certainly doesn’t make him a hero.  John Dehner’s Pat Garrett might be the best portrayal here, although he, too, seems overwrought at times.  And there are pacing problems, too.  The final scene, Garrett’s killing of Billy, takes place at night but otherwise doesn’t much resemble the actual events. Here, the anti-heroic Billy is unarmed but maneuvers Garrett into shooting him in the half light; he then falls on his back across wooden rails in a position that suggests crucifixion.  There’s also the strange character of Moultrie (Hurd Hatfield), who seems driven to mythologize Billy and then betray him when he feels himself betrayed. 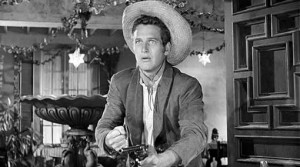 Newman as The Kid (using his left hand, of course), and The Real Kid.

The screenplay is based on a play by Gore Vidal, and maybe that accounts for some of the anguish.  In some ways it foreshadows Penn’s Bonnie and Clyde ten years later, with the alienation of the undereducated outcast.  Peckinpah’s later (1973) version of the story is more historically accurate, although it has its own problems.  In black and white.

This is an early western by Arthur Penn, who was not known for making westerns.  Indeed, it was his first film of any kind.  He is best remembered for 1967’s Bonnie and Clyde and the revisionist western Little Big Man in 1970.  This was a flop at the box office in the U.S., but was praised by French film critics.

Historical note:  The title of this film comes from the only known photographic image of Billy, a scratched-up thing that shows him holding a rifle and wearing his pistol on the left.  (Somehow the left-handedness seems to be another detail that suggests Billy was off kilter.)  More recently, research suggests that the image was flipped in development, and that Billy was really right handed.  He was still kind of squirelly and unduly given to violence, but he didn’t particularly use his gun with his left hand.