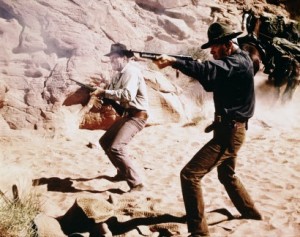 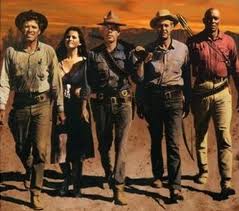 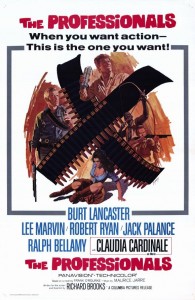 This is one of those movies that time has not treated kindly in a physical sense.  Most who have watched this movie in the DVD age have only seen a grainy transfer with missing scenes.  If you watch it on TCM or MGM HD, you’ll see a nice, clear print.  And as of 2020, there is a nice, clear blu-ray of this available from Kino Lorber, with accompanying commentary.

The plot is a typical Elmore Leonard story, in which bad guys underestimate somebody who looks regular but has hidden skills—an everyman rising to battle.  Burt Lancaster is Bob Valdez (Lancaster was 57 but in great shape), a New Mexico peace officer of Latino ancestry.  He is forced by powerful rancher Frank Tanner (John Cypher) to.kill a black man accused of murder.  Valdez asks the rancher for $100 in reparations for the black man’s pregnant Indian widow, and in response is almost killed by the rancher’s henchmen.  They beat him badly, tie him to a cross and drive him out into the barren mountains to die.  After a brief recuperation, Valdez suits up in his old gear from his days as an army scout.  He takes to the mountains of his own volition, resurrecting his tracking and hunting skills from earlier days scouting Apaches for the army and Gen. Crook, “before I know better.”  He captures one of the rancher’s men and sends him back with the message “Valdez is coming.”  The hunt is on in earnest, with the prey becoming the hunter. 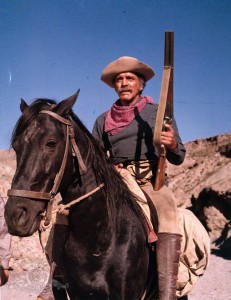 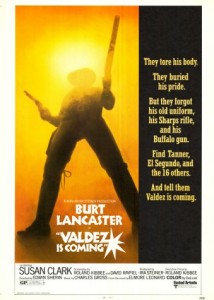 Valdez captures the rancher’s girlfriend (Susan Clark), who is also the widow of the man the original black man was supposed to have murdered.  She becomes his unwilling companion as he hunts Tanner and his men while they’re hunting him.  Over time, she develops an attraction to Valdez because of his tired decency, and because he treats her better than the other men she has known.  Leading Tanner’s men on the hunt is El Segundo (Barton Heyman), Tanner’s Mexican foreman who comes to his own grudging respect for Valdez.  Richard Jordan plays a Tanner gunman who releases Valdez from his cross and is then captured by Valdez in turn. 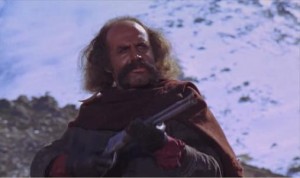 We’ve seen this story of the hunted-becoming-the-hunter before, in Joe Kidd and Chato’s Land, to cite two examples from the same time period.   This version is better, in large part because of Lancaster’s performance and a fairly coherent story based on a novel by Elmore Leonard.  It also has overtones of racial conflict and bigotry in an early 1970s way.  A movie with modest pretensions, it’s nevertheless worth watching.

Taken together with another Elmore Leonard story from the mid-1960s (Hombre, also an excellent movie from 1967), you can see Leonard playing with unusually capable protagonists from minorities (Bob Valdez is Latino, John Russell is more Apache than white). 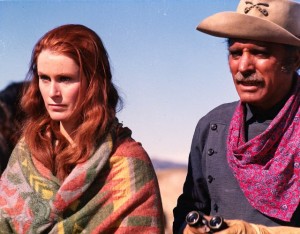 This was filmed in Spain and the terrain has a look similar to the spaghetti westerns of its era.  Along with the excellent Ulzana’s Raid, this is one of the two “old scout” movies Lancaster made about the same time, among the best of their type.  For Susan Clark in another western, see her with James Garner in the comedy Skin Game.