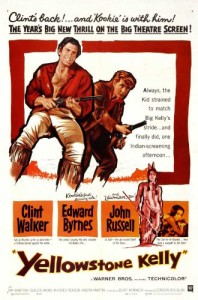 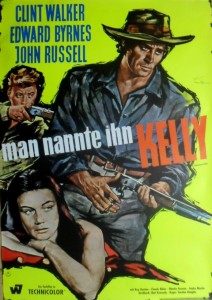 Luther “Yellowstone” Kelly was a real frontier trapper and scout, whose particular expertise and knowledge was in the Montana area from which he got his nickname.  He served as the chief of scouts for Gen. Nelson A. Miles in the Yellowstone district during the Sioux wars of 1876-1877, the same time period as this movie.  He was not, as the prologue of the movie would have it, the first white man to cross the Yellowstone Valley.  He was more than thirty or forty years too late for that.  Some of Lewis and Clark’s party had gone down the Yellowstone Valley even seventy years earlier on their return from the west coast.

In this version, Kelly (Clint Walker) rides into Fort Buford (at the confluence of the Missouri and Yellowstone rivers on the western border of North Dakota) to replenish his supplies.  Custer’s defeat at the Little Bighorn has already happened, so this is after June 1876.  While at Fort Buford he advises inexperienced but ambitious Major Towns (Rhodes Reason) against his plan to hunt the Sioux and refuses to go with the cavalry.  He ends up fighting with several soldiers, led by a sergeant (Claude Akins), and he acquires Anse Harper (Edd Byrnes) as a kind of unwanted apprentice.

Major Towns:  “In other words, you refuse.”
Yellowstone Kelly:  “In any words, I refuse.” 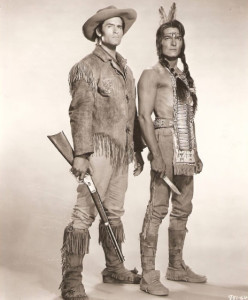 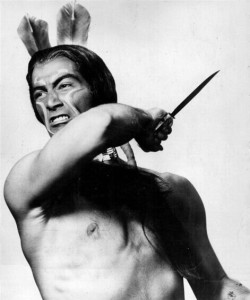 Clint Walker as Kelly and John Russell as Gall; and Ray Danton as Sayapi.

As Kelly and Harper ride into the Snake River country with their two supply mules, they encounter hostile Sioux, who capture them.  They are taken to Gall (John Russell), chief of the Hunkpapa Sioux.  It develops that seven years earlier Gall had been shot on the Snake, and Kelly had cut out the bullet and healed him without knowing who he was.  In return, Gall has allowed Kelly to trap the Snake country for seven years.  Now he wants Kelly to remove a bullet from another Indian—from a captive Arapaho maiden, Wahleeah (Andra Martin).  A complication is that Wahleeah’s captor is Gall’s nephew Sayapi (Ray Danton), who does not trust Kelly.

Kelly is successful in removing the bullet; in return Gall allows Kelly and Anse to leave with their mules.  As they move into Kelly’s cabin and set up traps, they see an Indian rider approaching and then fall off his horse.  It’s Wahleeah, who has escaped from Sayapi and is now all but dead.  As she lies recovering, Gall rides up and decides she can stay the winter with Kelly and he will retrieve her when he returns from his winter hunting ground.  An angry Sayapi breaks with his uncle and rides off with a few followers. 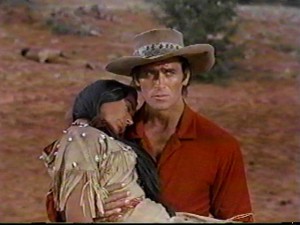 As Kelly and Anse get to know Wahleeah, she tells them she intends to escape to her Arapaho people, who appear to be near the area of Yellowstone Park, a hundred miles away.  Kelly intends to turn her back over to Gall in the spring.  Anse, who appears to be falling for her, thinks Kelly might be wrong.  As Anse is about to help her escape, Sayapi shows up, shoots Anse, takes Wahleea and burns the cabin.  Kelly comes back, follows the Sioux trail and overtakes them at night.  He attacks, kills several of them, including Sayapi, and takes back Wahleeah.  Heading back for his burned-out cabin, he encounters Major Towns’ column about to cross the Snake River to find and attack the Sioux.  Towns will not be dissuaded.  “I’ll tell you once more, Major. On this side [of the river] you’re in trouble.  Over there, you’re dead!” 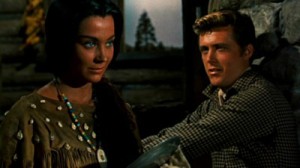 Kelly and Wahleeah ride back to home ground, but are soon overtaken by the remnants of Major Towns’ column.  The major is dead, and the column and Kelly are soon surrounded by Gall and his warriors.  Gall offers to let Kelly depart in peace if he gives up Wahleeah, but Kelly refuses.  After a couple of attacks demonstrate that the column is likely to be wiped out, Wahleeah breaks for the Sioux.  When she falls, Kelly and Gall meet over her, and Gall makes the same offer again.  But finally he recognizes that Wahleeah has chosen Kelly, and he departs in discouragement or disgust.  Kelly and Wahleeah ride off together.

The screenplay for this movie was written by Burt Kennedy, then in the middle of his fruitful collaboration with Budd Boetticher and Randolph Scott.  It was originally intended for John Ford to direct, with John Wayne starring as Kelly, but they opted for The Horse Soldiers instead.  Several of the principal actors were under contract to Warner Bros. for television series:  Clint Walker in Cheyenne, Edd Byrnes in 77 Sunset Strip (known more for his hair than for his acting), John Russell (Lawman) and Ray Blanton (The Alaskans).  Walker even rides Brandy, his big horse from the Cheyenne series.  This is Clint Walker’s best-known western, but not the best.  That would probably be Fort Dobbs, made the previous year, also with director Gordon Douglas.  John Russell made this the same year he played bad guy Nathan Burdette in Rio Bravo, with John Wayne.  The shifty Ray Danton had played Blackie in The Spoilers before moving into television work.  Blue-eyed Andra Martin was a Warners starlet, and this may have been the high point of her movie career.  Warren Oates has a non-speaking role as a trooper who gets killed.  You have to look fast to catch him. 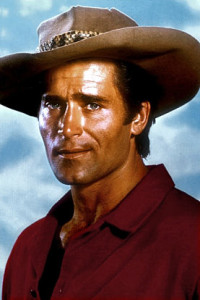 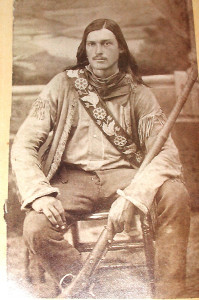 Clint Walker as Yellowstone Kelly; and the real Luther Kelly during his scouting period in the 1870s.

There are several problems of geography and tribal history with this story.  Fort Buford was in far western North Dakota, and the Snake River rises in southwestern Wyoming, hundreds of miles to the west across the wide breadth of Montana, and never even makes it into Montana before heading west across Idaho.  The Snake River and Yellowstone Park were not in Sioux country; the dominant tribe would likely have been the Shoshonis (or Snakes), although you could perhaps find Blackfeet or even Crows in the vicinity.  But not the Sioux, who were enemies of the Shoshonis and Crows.  The Arapahoes were not enemies of the Sioux but were, like the Cheyennes, traditional allies of the Sioux.  Still, if you like Clint Walker, this is a watchable western with kind of a meandering plot and a seductive blue-eyed Arapaho maiden.  In color, at 93 minutes. 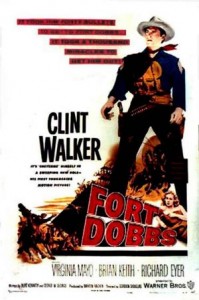 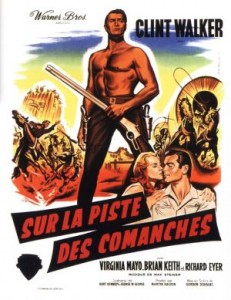 A variation on a theme of Hondo—remote ranch threatened by Indians, widow with young son befriended by capable scout who may have had something to do with her husband’s death.  Apparently this was kind of a low-budget variation, with a couple of television actors starring.  In black and white in 1958, filmed near Moab, Utah.  Cinematography is by William Clothier.  Written by George W. George and Burt Kennedy (screenwriter of the best Boetticher-Scott westerns), with music by Max Steiner.  The original title was Fifteen Bullets to Fort Dobbs, shortened upon release to just Fort Dobbs.

How much you like this western depends on your tolerance for Clint Walker’s brand of taciturn acting.  Walker is Gar Davis, big and good with a gun but not so good with women, apparently.  As the movie opens, he kills somebody and the sheriff from Largo (West Texas?  New Mexico?) leads a posse after him into Comanche country.  Davis finds a body with an arrow in the back; he switches jackets with the corpse and pushes it into a ravine, hoping that the posse will take it for him without getting close enough to get a better look.  When the posse, already uncomfortable with chasing Davis, finds the body, they are only too willing to head back without investigating further, taking Davis’ horse.  Davis finds a remote ranch and attempts to make off with a horse, only to be shot a glancing blow.  It turns out the ranch is owned by Mrs. Gray (Virginia Mayo, in one of her better roles) and her son Chad (Richard Eyer). 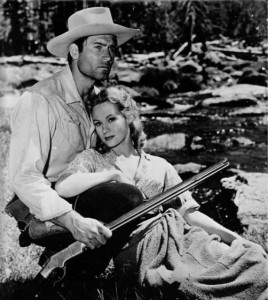 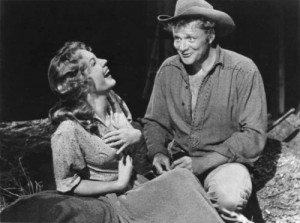 Gar Davis with Mrs. Gray, and an amusing exchange with Clett the gunrunner.

It further turns out the corpse Davis had found was her husband, and she begins to think Davis killed him.  Davis gets the widow and son out just as the Comanches torch the ranch, and they head for Fort Dobbs.  The trip is complicated by numerous Comanches, encounters with Clett, a garrulous and unscrupulous gun-runner (well-played by Brian Keith), and Mrs. Gray’s headstrong nature and suspicions of Davis.

When they do make it to Fort Dobbs, they find the garrison has been massacred.  Not far behind them are the survivors from Largo, led by the sheriff (Russ Conway), with Comanches in pursuit.  They’re running out of ammunition, and Davis volunteers to head for Santa Fe for help.  By this time the sheriff has persuaded Mrs. Gray that Davis didn’t kill her husband, but he still intends to hang Davis for a killing back in Largo.  He fills Mrs. Gray in on more of Davis’ background, and that his love for a faithless woman was at the root of his troubles with the law. 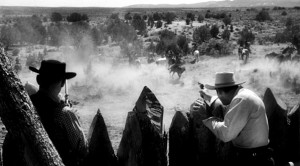 On his way to Santa Fe, Davis encounters Clett the gunrunner again and tries to persuade him to take the guns back to Fort Dobbs.  They shoot it out, and Davis heads back with the guns—new Henry repeating rifles.  Davis gets in just as the Comanches attack again, and the rifles enable the fort’s defenders to ward off the Indians.  At the end, the sheriff sends Davis off to Santa Fe with the Grays, now that they’ve all forgiven him.

This is quite watchable.  In fact, this is probably Clint Walker’s best western, not primarily because of his acting, which is pretty consistent from movie to movie, but because of the decent script and good supporting actors, especially Mayo and Keith.  For Virginia Mayo in another good western, see her with Joel McCrea in Colorado Territory.  Shot on location near Moab and Kanab, Utah, in black and white. 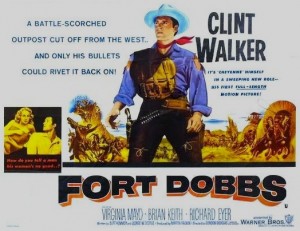 Douglas also directed the 1966 Stagecoach remake, Rio Conchos, Yellowstone Kelly, and Barquero along with more mainstream stuff like In Like Flint, Robin and the 7 Hoods, The Detective and They Call Me MISTER Tibbs.  He’d been directing movies since 1935—kind of an Andre de Toth type.