At the heart of this story is the strained relationship between Samuel Jones (Tommy Lee Jones), a father who abandoned his family years ago to go live with the Chiricahua Apaches, and his grown daughter Maggie Gilkeson (Cate Blanchett), a New Mexico rancher and healer with two daughters of her own.  A restless sort, Jones has never been one either to maintain family ties or to stay very close to civilization.  “If I stay here very long, I might misbehave.  Somebody might have to kill me.”  Now that he thinks he’s dying, he is in fact seeking out his lost family to make what modest amends he can at this late stage of his life. 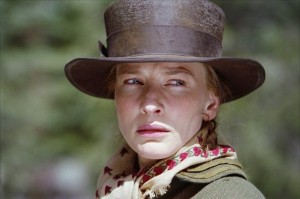 Maggie is fairly blunt about the fact that she has no use for him at all, but she finds that she needs his help to recover her own daughter Lily (Evan Rachel Wood) when she is abducted by a band of white and Indian renegades.  Samuel Jones’s knowledge of Indians and the terrain and his ability to navigate and survive in desolate conditions are essential to the pursuit, or Maggie wouldn’t have taken him along even in her desperation.  Maggie turns out to be her father’s daughter in the good sense:  she has grit, resourcefulness and determination, carrying the small group in their mission by sheer will at times.  On the expedition, they come to know each other at last, and they come to some acceptance of each other’s weaknesses.  They do eventually rescue the girl, among others.  And come to a greater appreciation of Indians generally.  And take care of the bad guys.  It’s better and more fun than that sounds.

Jones, a native Texan, is really a natural in westerns, with his weathered face and quick drawl.  He, like Robert Duvall, has attained a kind of iconic status in the genre, in part from their partnership in Lonesome Dove.  Blanchett, perhaps the premier actress of her generation, has never been in a western before, but she’s as convincing at this as she was as such imperious characters as Elizabeth I in Elizabeth or as Katherine Hepburn in The Aviator.  Val Kilmer is excellent in a cameo as the not-terribly-helpful commander of a platoon of cavalry.  And Aaron Eckhart seems to deserve better than the small, thankless role he has early in the movie as a foreman and romantic interest for Maggie.  Jenna Boyd as younger daughter Dot Gilkesen outshines abducted older daughter Lily (Evan Rachel Wood), but much of that may be in the way the parts are written.  Jay Tavare and Simon Baker are very good as Katiyah and his son, Apache acquaintances of Jones with more dimension than Indians usually are given in westerns.  Canadian Indian actor Eric Schweig, so noble as Uncas in Last of the Mohicans a decade earlier, is virtually unrecognizable as the renegade Apache El Brujo. 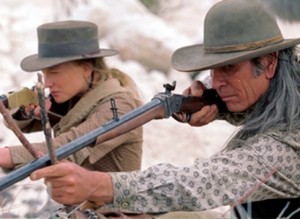 In general theme, this is similar to The Searchers, the John Ford classic from 50 years earlier.  In interviews, director Ron Howard said that The Missing was basically a remake of The Searchers, and that may be true in the sense that the basic plot involves white people trying to retrieve captured girls from Indians.  In broad outline, it’s another of many westerns with a search-for-family theme, but the two movies are based on separate novels by different authors (Alan LeMay and Tom Eidson).  And as it turns out, the main characters, their attitudes and the balances between them are very different.  The time frame is compressed here, the irrationality in the obsessive pursuit is gone and the attitudes toward Indians are much more complex.  Jones and Maggie are also searching for their lost father-daughter relationship, even though they’re actually in the same place for the first time in decades, and for common emotional ground that would allow them to remake that relationship.  There’s an undercurrent of conflict between conventional Christianity (embodied by Maggie) and Indian animism (embodied by Jones and others) that is not entirely successful.

With the confluence of top-flight director and cast, this could have been absolutely terrific, and it isn’t, quite.  The weakness is in the story, with its emphasis on the Apache brujo leader of the renegades and on supposed Indian mysticism.  That current is a little freaky and doesn’t mesh entirely with the more realistic western elements of the film.  But it’s still an excellent western.  Ron Howard was a first-time director of westerns with this and probably won’t remember it as one of his three or four best movies, but it’s enjoyable.  It’s rated R, largely for its violence and for the nastiness of the renegades. 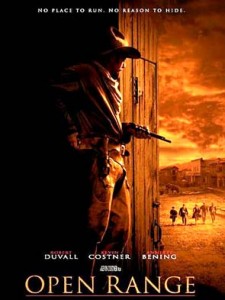 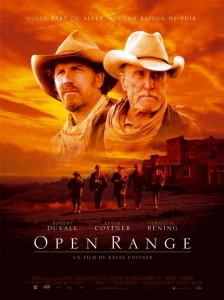 Kevin Costner isn’t in great critical favor as a director these days, but he also seems to be one of the three or four best current directors of westerns (see the discussion of directors below).  He’s probably underrated as an actor as well, since he’s turned in some strong work at this stage of his career in such non-westerns as The Upside of Anger.  He directed and starred in Open Range, and he did very well in both those capacities. 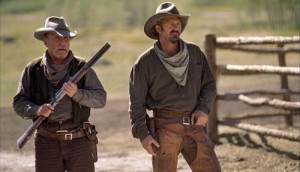 Boss Spearman and Charley Waite heading for the showdown.

The story is a pretty typical cattle drive/range war sort of thing, in which Robert Duvall is Boss Spearman, a rancher moving his herd to market in 1882 with the help of Charley Waite (Kevin Costner) and a couple of others.  At Harmonville, they run afoul of the entrenched local land baron Denton Baxter (played by the British actor Michael Gambon) and his minions, including a corrupt marshal (played by James Russo).  These sorts of conflicts are never settled easily in a western.  “Man’s got a right to protect his property and his life, and we ain’t lettin’ no rancher or his lawman take either.”  Duvall is superb as usual, and Costner has enough heft and strength to play off him well.  The Costner character seems a bit dour under the harsh circumstances (although less so than in Lawrence Kasdan’s Wyatt Earp), but he looks and plays as authentic.

Even so, this might be ordinary enough were it not for two elements.  The first is an excellent mature romance between Waite and Sue Barlow, the local doctor’s sister (Annette Bening)—mature because it’s between realistic people of a certain age, not because a lot of flesh or overt passion is shown.  It is convincing, charming and seems true to the period.  The second takes a while to develop, but the culminating shoot-out actually manages to seem more believable and real than most others in westerns.  Note, however, Waite fanning his gun.  It looks impressive and conveys a sense of familiarity with a gun, and perhaps expertise, but it was a notoriously inaccurate and often wasteful way of discharging a weapon, especially if you needed to save ammunition during an extended fight.  Still, westerns have always been reluctant to show gunfighters reloading, since it slows down the action.  The sound of guns firing in this film is loud enough to carry a shock with it (as with the punched-up sound of gunshots in Shane 50 years earlier), and that seems realistic, too.

In the extreme situations that develop, Spearman and Waite each discover new things about the other.  There seem to be real relationships here. 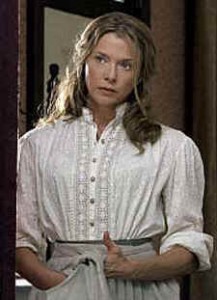 Michael Gambon’s sheer malevolence as the land baron can seem a little over-the-top, and there’s a fair amount of scenery-chewing on his part.  However, there is the gorgeous scenery of the Canadian Rockies as captured by cinematographer James Muro.  This was the last movie made by veteran character actor Michael Jeter, who died soon after its release.   Because of the violence, the movie is rated R.