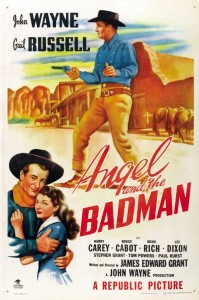 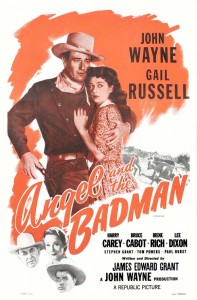 This was the first movie in which John Wayne, an increasingly big star at the time, had a production role.  It now looks like a relatively low-budget movie, with the film and sound quality not as good as one would like.  Compare it, for example, with My Darling Clementine and Red River, both from about the same time, which both have a lot more clarity in picture and sound.  Or maybe there are just a lot of bad prints and transfers of this film out there.

The badman of the title is Quirt Evans, played by Wayne.  The names are a bit of a problem in this movie—they haven’t aged all that well.  Quirt Evans, Laredo Stevens, Marshal Wistful McClintock:  one has to chalk up those bits of clunkiness to writer-director James Edward Grant, a favorite of Wayne’s.  Notwithstanding some clunkiness in the writing and questions about technical quality, this movie works pretty well and is quite watchable.

As the titles roll, a lone horseman races across the desert landscape, pursued by other riders.  As soon as the opening credits are done, the horse stumbles, throwing the wounded rider in front of a wagon with a man and a young woman.  The people in the wagon are the Worths, Quakers originally from Pennsylvania, and they nurse Evans back to health after the local doctor removes a bullet from him.  He seems taken with Penelope Worth (Gail Russell), the young woman in the wagon, the daughter of the Worths (John Halloran and Irene Rich) and the angel of the title.  And she is even more obviously taken with him. 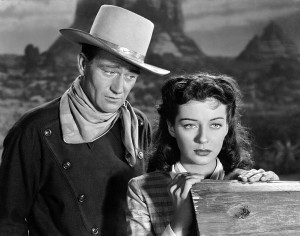 Territorial marshal Wistful McClintock (Harry Carey) arrives at the Worth ranch to ask about Evans’ comings and goings.  Bit by bit, Evans’ backstory emerges.  He was a deputy to Wyatt Earp in Tombstone but left when a gambler named Walt Ennis, his foster father, was killed by Laredo Stevens (Bruce Cabot).  He has been straddling the line between lawful citizen and outlaw ever since.  Stevens and two henchmen show up looking for Evans, too, and he bluffs them with an empty gun, selling Stevens a plot of land he has just filed filed on.

As he recovers, Evans helps out the Worths by persuading a cranky neighbor to release irrigation water to the surrounding farms.  He attends a Quaker meeting, at which he is given a Bible with his name on it.  He forgoes wearing a gun most of the time, although he is not comfortable without it.  He gets wind of a job Laredo Stevens is planning, stealing a herd of cattle.  Evans and a couple of old friends steal the stolen cattle from Stevens and celebrate in the old style—by gambling, drinking and fighting. 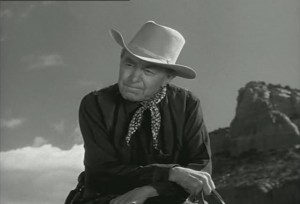 The marshal is skeptical: Harry Carey as Marshal Wistful McClintock.

Evans finds that he misses Penny, though, and he makes his way back to the Worth farm.  They go out riding in a wagon, only to be attacked by Laredo Stevens and his henchmen, who are sure that Evans must have a gun somewhere.  (He doesn’t, at least not this time.)  Their wagon goes over a cliff into a river, and Penny is gravely injured in some unspecified way. 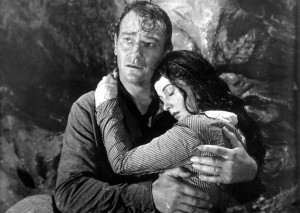 That’s it for Evans.  Putting on his gun, he heads for town and calls out Stevens.  While Stevens and his pal Hondo Jeffries are dithering, Penny has made a miraculous recovery from her mysterious injuries/ailments, and her parents have brought her to town in a wagon to see if gazing into her soulful eyes (and her blue eyes are very soulful indeed) will deter Quirt from his vengeful wrath.  As Laredo and Hondo step out of the bar, Quirt turns to them without his gun, which he has reluctantly given to Penny.  Two shots ring out, and Stevens and Hondo fall.  It is Marshal McClintock, who was supposedly out of town.  He sadly notes that he will probably have to dispense with the pleasure of hanging Evans, since he has now shot Stevens himself.  It’s kind of a deus ex machina ending, with the marshal dropping in from nowhere.

There is a bit of clunky writing, but some interesting points, too, with the doctor’s speeches and the cranky neighbor as well.  Because of the strength of the three star performances (by Wayne, Russell and Carey) this all works.  Wayne is handsome, young-ish and charming in his shield-front shirts.  Russell is quite warm and convincing, both as a Quaker and in being in love with Evans.  And she’s gorgeous.  Carey, nearing 70 and in one of his last movies, doesn’t spend a lot of time on screen, but all the attention goes to him when he’s there, even if he’s just sitting on a horse.  A film actor since 1909 and an early western star in the 1910s, Carey had been a mentor to both John Ford and John Wayne when they were getting their starts in movies.  As with 3 Godfathers, made by Ford around the same time, there is a kind of nostalgic assumption of the value of religion and religious community surrounding Quirt Evans’ conversion, although it is difficult to see him as a Quaker even at the end of the movie.  The beautiful Gail Russell brings a believability to her immediate love for Evans; the potential conflict is in working out the terms between them, or even if Evans is willing to stay with one woman.  Supporting players John Halloran and Irene Rich are good as Penny’s parents. 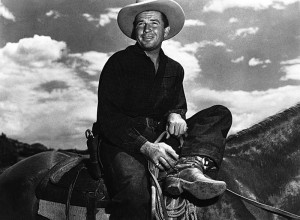 Bruce Cabot doesn’t look so bad as villain Laredo Stevens; he even wears a white hat.

The music is used in a heavy-handed way at times (ominous chords at the appearance of a rider, for example).  Although the technical quality of the film and the sound are not all that one might hope for in 1947, there are some interesting uses of light and dark in (a) the scene in which Evans persuades the local telegrapher to send a message after hours, and (b) the scene in which Evans blows out most of the lights in the ranch house and bluffs Stevens and his men with an empty gun.  At 100 minutes, it feels just about right, although the ending is a little abrupt.  Filmed in Sedona, Arizona, in black and white.

Many of the people in this production will appear again.  John Wayne by this time is well on his way to being the biggest western star of the next thirty years, of course.  Hank Worden has a bit part, Yakima Canutt is second unit director, and Richard Farnsworth (The Grey Fox) and Chuck Roberson are uncredited stuntmen.  This was the first time Wayne and Bruce Cabot worked together, and Wayne would find Cabot roles in his movies for the next thirty years, too.  Gail Russell had a short career and a tragically short life due to alcoholism.  Her other notable role in a western is in the Batjac-produced Seven Men from Now in 1956, with Randolph Scott—an opportunity given to her by Wayne’s company at a time she was having a lot of trouble in her life.  She’s good in that, too, but it would be one of her last movies.  She died at 36. 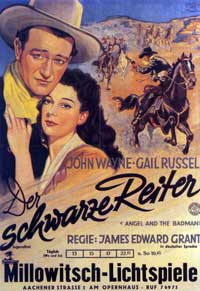 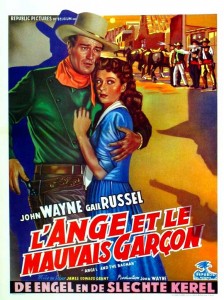 The entry of a gunman into a religious community is one of the older western stories.  It was the basis of Zane Grey’s 1912 best-seller Riders of the Purple Sage (in which Lassiter, the gunman, definitely does not reform), and William S. Hart becomes the classic reformed gunman due to the love of a good woman named Faith (sister of a preacher) in Hell’s Hinges (1916).  It still works here thirty years later in 1947.  Witness (1985), with Harrison Ford as a hard-boiled city cop among the Amish, is a non-western version of the story.  For a more recent western take on the story, see The Outsider (2002), which ends with the young woman leaving the religious community rather than the gunman joining her in it.  Angel and the Badman was also remade for television in 2009, with Lou Diamond Phillips as Quirt Evans and Luke Perry as Laredo Stevens.

Note:  Having now re-watched this on TCM, which makes an attempt to provide both the best prints and widescreen viewing when appropriate, I can now say that the technical shortcomings noted above are because there are a lot of bad prints of this out there, including the crummy one you’ll get if you rent this movie from Comcast as I originally did.  The print shown by TCM both looked and sounded fine for 1947 standards.