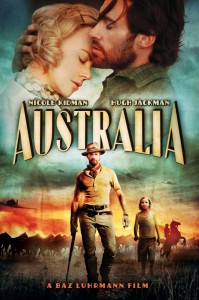 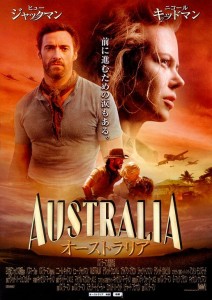 As the title suggests, this is one of those westerns that does not take place in the American west.  But it involves two traditional western themes:  the European coming to the frontier (see The Big Country, Cowboy, even Last of the Mohicans) and learning to appreciate it, and the cattle drive against great odds (e.g., Red River, Cowboy and Broken Trail).

The first half or more of this lengthy epic involves a cattle drive across northern Australia to Darwin.  It takes place in 1939, but this part is a typical cattle drive story.  Nicole Kidman plays Lady Sarah Ashley, an English aristocrat whose husband has been developing Faraway Downs as a cattle operation in the deserts of the northern Australian outback.  The ranch has been hemorrhaging money—Lady Sarah’s family money.  Lady Sarah determines to sell the operation and heads for Australia. 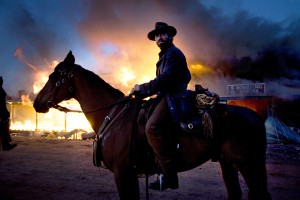 Her husband Maitland is killed just as she arrives; she fires his treacherous foreman Neil Fletcher (David Wenham) and hires the Drover (Hugh Jackman) to get what cattle she has to Darwin to sell to the military (virtually the same story as Wrangler, but a different war).  She develops an affection for the child Nullah (Brandon Walters), Fletcher’s half-aborigine son who’s also the grandson of aborigine shaman King George.  After a successful drive against great odds, Lady Sarah and Drover shack up together.  His first wife was an aborigine, and he maintains close ties with them, for which he is ostracized by many whites.  Cattle baron King Carney (Bryan Brown) keeps trying to subvert Lady Sarah’s efforts and buy Faraway Downs (also much like the plot of Wrangler). 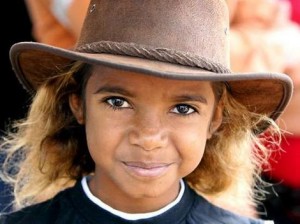 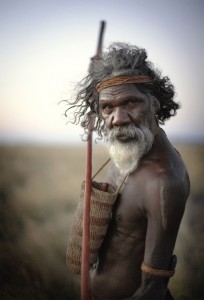 Nullah and his grandfather King George.

In the last part of the movie, Fletcher connives to get Nullah taken away until Lady Sarah sells Faraway Downs to him (Carney now being dead and Fletcher being married to his daughter).  The Japanese attack both Darwin and the mission island where the children are kept.  The Drover, thinking Lady Sarah has been killed in the attack, gets a small sailboat to the mission island and rescues the surviving children, including Nullah, just as the Japanese overrun the place.

Back in Darwin, Fletcher’s wife has been killed and he’s consequently lost his control of the Carney empire.  In a rage he tries to shoot Nullah but is himself killed by King George.  The Drover, Lady Sarah and Nullah are all reunited happily in the fiery ruins of Darwin.

The film is overblown, poorly edited and too long, with a story that doesn’t hang together all that well.  There are lots of lingering shots of passionate characters with swelling music, telling us how we’re supposed to be feeling rather than trusting the story and acting to get us there.  It’s very politically correct (in current terms) about looking down on former racial attitudes, and contains a fair amount of ill-defined aborigine mysticism.  It’s not that former racial attitudes were correct–one cannot deny that blacks, Indians and Australian aborigines were treated badly in ways that would not be countenanced today.  But it feels anachronistic to adopt completely the modern views on such matters.  There are lots of obvious CGI effects, especially in the harbor at Darwin. 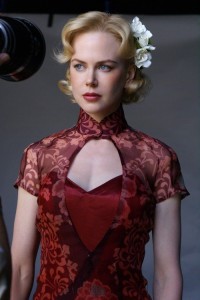 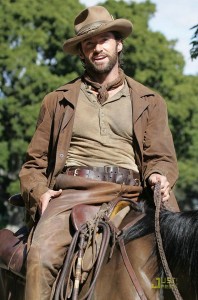 For those who are wondering if there was an island near Darwin filled with children attacked by the Japanese, there wasn’t.  But one of the first Australians to spot the incoming Japanese planes in the attack on Darwin in Feb. 1942 was a priest stationed on a lonely island off Darwin’s shore.  “An unusually large air formation bearing down on us from the northwest,” he radioed into Darwin’s operators on the morning of the attack.  The operators shrugged off the warning.  Twenty minutes later, the town was attacked.  (This, according to Cathy Schultz, Ph.D., a history professor at the University of St. Francis in Illinois.)

Along with the title, this is an almost entirely Australian production, funded in part by Australian government sources.  The director, Baz Luhrman, is Australian, as are the leads (Jackman and Kidman) and most of the other actors.  The multi-talented Hugh Jackman obviously needs to find a good script for a western and do a real one.