Burt Lancaster as Bill Dolworth in The Professionals 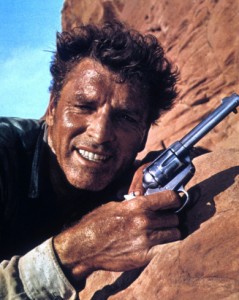 As one of the leading actors of the 1950s and 1960s (and one of the most versatile), it’s a little unusual to find Burt Lancaster as something other than the lead, but he was willing to do whatever interested him.  Here, he’s a supporting actor, although an important one.  Bill Dolworth is a former participant in a Mexican civil war, a dynamiter and demolitions expert, a womanizer, and a man of action.   A garrulous counterpart to Lee Marvin’s taciturn leader, he pushes the action forward with his trademark athleticism and big smile.  Some would claim that Lancaster’s leading performances in Lawman and Valdez Is Coming belong on this list, too, and maybe the old scout in Ulzana’s Raid.  Along with perhaps his charismatic mostly-bad guy in Vera Cruz, and his Wyatt Earp in Gunfight at the OK Corral, although this last is eclipsed by Henry Fonda and Kurt Russell in the same role.

Joel McCrea as Steve Judd in Ride the High Country , Rev. Josiah Dozier Gray in Stars in My Crown, and Jeff Butler in Union Pacific

Excellent in westerns generally, his greatest western role was one of his last.  However, McCrea was good in any number of smaller movies, such as Ramrod, Colorado Territory, Four Faces West, Stars in My Crown and Trooper Hook, which are not so well remembered today. 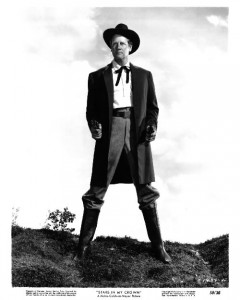 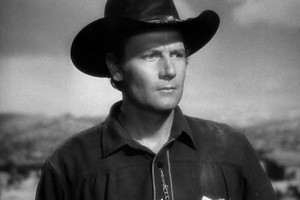 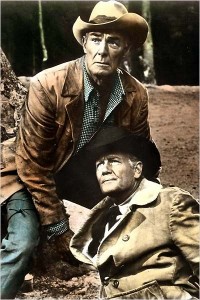 Randolph Scott as Gil Westrum in Ride the High Country

At mid-century (1950), Randolph Scott was the biggest male box office star in the country, appearing almost exclusively in westerns by then.  The westerns he was making at that time are now mostly forgotten, and his very best work was still ahead of him.  In his last movie, he was very memorably partnered with Joel McCrea as a couple of underappreciated old timers taking a job guarding a bank’s gold, just to finish out their string.  Scott’s Gil Westrum is a little more elusive than McCrea’s Steve Judd, but in the end they stand together.  Scott was usually thought to be a more inexpressive actor than McCrea, perhaps more in the stone-faced William S. Hart mold, but they were both perfect here.  In fact, Scott could be on this list with his best performances for director Budd Boetticher in the late 1950s:  Seven Men From Now, The Tall T, Ride Lonesome and Comanche Station, a remarkable string.  He was also very good as a conflicted good-guy/bad-guy in the early 1940s in Virginia City and Western Union. 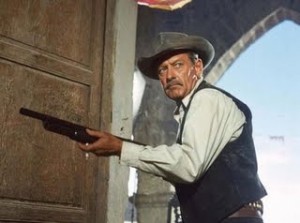 William Holden as Pike Bishop in The Wild Bunch and as Capt. Roper in Escape from Fort Bravo

An excellent actor with a bit of an urban edge, Holden found a way to be effective in westerns, usually with some form of a hard-bitten personality and his ability to project unquestioned competence.  In addition to these two performances, he’s also very good as the doctor in The Horse Soldiers and the horse trader-cattleman in Alvarez Kelly, two Civil War epics.  In two of his earliest movie roles, see him with Jean Arthur in Arizona and with Glenn Ford in Texas. 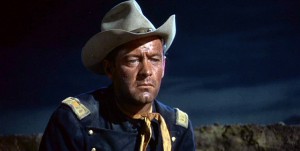 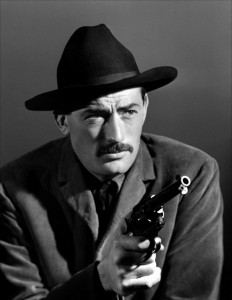 Gregory Peck as Jimmy Ringo in The Gunfighter

Peck was like Joel McCrea in naturally projecting a basic decency that usually made him the moral center of his films.  Usually, but not always, as he showed in Duel in the Sun and Billy Two Hats, in both of which he was less decent and also less convincing.  As Jimmy Ringo in The Gunfighter, he wears a peculiar short-brimmed black hat as he tries to retire from the gunfighter life and reclaim a family long lost to him.  This film is probably the definitive statement of the proposition (later expressed by Burt Lancaster in Lawman) that you can’t walk away from your past.  You are what you’ve made yourself.  Peck also projects a wary, dangerous edge as he tries to fend off the inevitable challengers drawn by his reputation.  For a more obviously decent good guy, see his performances in the epic The Big Country and in The Bravados.  For an even earlier western with noir-ish elements, see him in Yellow Sky. 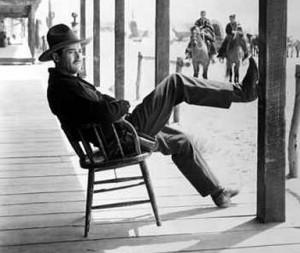 For his ability to play the decent mid-American—the guy who rises to the occasion as we’d all like to think we would—Fonda was the definitive Wyatt Earp.  But he also liked to play against that decency, and he was remarkably good in many of those those performances, too. 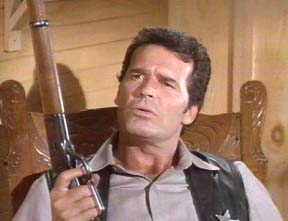 James Garner as Jason McCullough in Support Your Local Sheriff

Nobody’s ever been better than Garner at projecting easy-going good humor in a western, as he showed beginning with his television role as Bret Maverick.  However, the ultimate expression of this ability found a perfect vehicle and team in Support Your Local Sheriff, where he carries the movie lightly and very successfully without the slightest crack in that façade.  It’s hard to envision anybody else playing that role.  Both Mel Gibson (Maverick) and John Wayne (North to Alaska) tried variations on the role.  They’re good actors but not as good at this kind of role.  Not that the good-humored façade couldn’t crack; Garner was also superb in some of his grimmer performances, such as haunted scout Jess Remburg in Duel at Diablo or a dark and relentless Wyatt Earp in Hour of the Gun.  For more light Garner, see Support Your Local Gunfighter, Skin Game, and, late in his career, Sunset and Maverick. 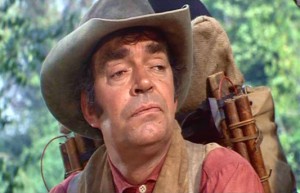 Jack Elam as Jake in Support Your Local Sheriff

Yes, it was a supporting performance.  With those crazy eyes, Elam was a lifelong character actor, spending a couple of decades as movie villains both modern and western.  And he was brilliant as Jake, the town “character” turned reluctant deputy, a riff on the Dean Martin role in Rio Bravo.  He went on, as he says, to become “one of the most beloved figures in western history.”  Or at least the history of western films.  This performance moved him from the bad-guy henchman roles he’d had for twenty years (look for him in Rawhide, Ride, Vaquero!, The Man from Laramie, The Comancheros and The Last Sunset, for example) into higher-profile and more varied characters.  For a similar role, see Support Your Local Gunfighter, where most of the team from the first movie was re-assembled, with slightly less success.  And of course he spends 20 memorable minutes waiting on a railway platform, often in close-up, in the prologue of Once Upon a Time in the West.  Not bad for the one-time studio accountant.