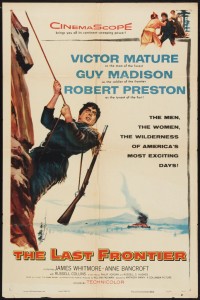 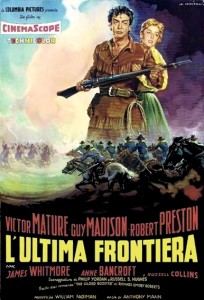 Since this is an Anthony Mann western (albeit without James Stewart), there are not one but two psychologically tortured characters.  The first is Jed Cooper, an almost feral man-child played by Victor Mature, a trapper who has apparently been raised in the wilderness by Gus (James Whitmore).  The other is Col. Frank Marston (Robert Preston), who got 1500 men killed in the Battle of Shiloh in 1862 and is now referred to as “the Butcher of Shiloh.”  He seems both unbalanced by that experience and surprisingly confident in himself.

It’s 1864 in the mountains of northern Wyoming and southern Montana, the land roamed primarily by the Sioux.  Three mountain men-fur trappers (Gus, Jed and Mungo, an Indian of unspecified tribe) are taking the results of their annual labors to sell, when they are stopped by Indians who are painted for war.  It turns out they are led by Red Cloud, who takes their guns, horses and furs and tells them they are no longer welcome in his lands because of the new fort built by white men.

The three decide to head for newly-built Fort Shallan (fictional, apparently), which is understaffed because of the Civil War still raging in the east.  Capt. Glenn Riordan (Guy Madison) is in charge, since his commanding officer was killed by Indians.  He takes on the three as civilian scouts.  Jed is fascinated by the military and civilization and its trappings, although he’s never been around white people much.  Riordan won’t let him enlist in the military, judging correctly that he’s temperamentally and developmentally unsuited to such a regimented life.  Jed is also taken with Corinna Marston (a blond Anne Bancroft), wife of the missing Col. Marston.  She’s having none of his roughness, though.  For now. 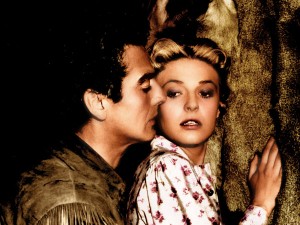 Marston has been commanding Fort Medford (also fictional), from which his forces have been driven off and which has been burned to the ground by Indians.  He arrives with a few soldiers and by virtue of his higher rank assumes command at Fort Shallan.  Marston is obsessed with getting back at the Indians in battle, whereas Riordan thinks the only hope for survival in hostile territory is to wait out the approaching winter in the fort, after which the Civil War may end and allow for more troops to be sent out to this remote wilderness.  Fort Shallan’s troops are both untrained and too few to attack the Indians with any chance of success.

It also becomes clear that there are tensions between the Marstons in their marriage.  And Jed and Corinna become more attracted to each other; that is, Corinna allows Jed to get closer.  He never had much restraint about his attraction to her.

Marston insists on accompanying a patrol stocking up on water near Red Cloud’s camp.  He and Jed scout the camp and Marston falls into a bear trap pit.  Jed refuses to help him out of it unless he agrees to give up his foolhardy plans to attack the Indians.  Back at the the fort, Gus and Corinna talk him into rescuing Marston anyway.  Marston gloats, “She wouldn’t let you do it, would she?”

Far from giving up his plans for attack, Marston proceeds with them.  He encourages a sadistic sergeant to attack Jed and when the fight results in the sergeant’s death, Marston calls for Jed’s execution.  Jed escapes into the forest and observes as Marston leads out a force guided by Gus.  The force is ambushed by Sioux, and Jed joins in the fighting, leading as many of the soldiers as can disengage back to Fort Shallan.  Both Gus and Marston are killed.  In the final scene, Jed is shown as a sergeant in a blue uniform at Fort Shellan in the winter.  Corrina Marston is still there.   Mungo (Pat Hogan) has gone back to the mountains.

Jed scouts during the foolhardy battle with the Sioux.

Somehow that seems an unsatisfying ending for a spirit as independent as Jed’s.  Mann said that the ending was forced on him by the studio.  Victor Mature seems a little old to be as wild as Jed acts sometimes, but he’s fine.  Mature was actually eight years older than James Whitmore, who plays his father-figure Gus and is said in the film to have raised him.  The best performance in this film is given by Robert Preston as the snakily out-of-kilter Col. Marston (reminiscent perhaps of the Captain Queeg character who provokes a mutiny in the the World War II story The Caine Mutiny).  Madison is good as Riordan, and Anne Bancroft is fine as Corinna.

This is a watchable western, but not among Mann’s best.  Based on the novel “The Gilded Rooster” by Richard Emery Roberts.  In color, 98 minutes.  Not to be confused with a 1986 television movie with the same title, set in Australia and directed by Simon Wincer.   On television, this has sometimes been shown with the title Savage Wilderness.  Although the story is set in the Northern Rockies, filming was done on location in Mexico.  That snow-capped mountain looming above the fort and the forests is Mt. Popocatapetl. 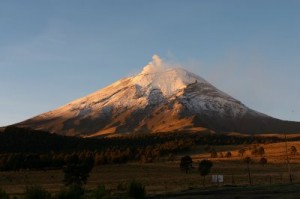 Historically, the events in this seem a little premature.  Red Cloud’s War is usually dated from 1866 to 1868, when it was ended by the Treaty of Fort Laramie and the U.S. army gave up Fort Phil Kearney, which was burned to the ground by the Sioux as soon as it was vacated.  It’s still generally considered the only white-Indian war in U.S. history which the Indians won.  The effects of that victory lasted only eight years, however, until the next Sioux war, in which Custer’s Seventh Cavalry was wiped out but the Sioux, Cheyennes and Arapahoes were forced onto reservations and lost these lands in Wyoming and Montana.   Some summaries place the events of this film in Oregon, perhaps because of the reference to Fort Medford and the beautiful mountain scenery, but Red Cloud’s war never got anywhere close to Oregon.  It was concentrated along the Bozeman Trail from central Wyoming to the gold mines of western Montana.