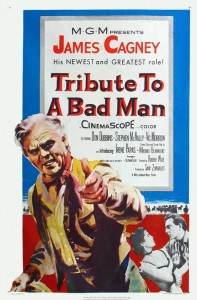 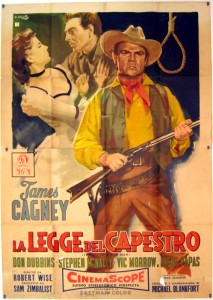 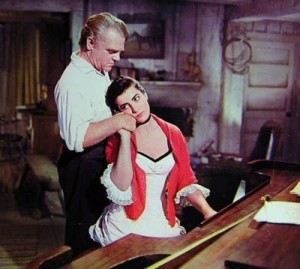 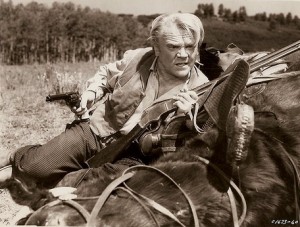 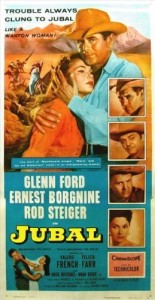 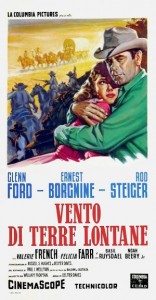 Jubal Troop (Glenn Ford) is a hard-luck cowboy whose horse dies while carrying him over Glacier Pass from Montana into Wyoming.  He is found unconscious by Shep Horgan, a big rancher in Jackson Hole, who offers him a job.  The situation is not without obvious complications:  one of the resident cowhands at Horgan’s ranch, Pinky Pinkum (Rod Steiger), resents any authority and the newcomer.  Even trickier is Mae (Valerie French), Horgan’s young wife from Calgary.  They’ve been married for 16 months, and she’s unhappy.  She’s previously had some kind of relationship with Pinky and now is coming on to Jubal, who’s having none of it.

Pinky:  “If you’re a cowhand, how come you stink of sheep dip?”

Jubal Troop:  “I hired out to a sheep ranch ’cause it was the only job I could get.”

Pinky:  “Most cowhands would die before they’d herd sheep.” 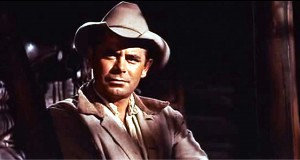 Glenn Ford as Jubal Troop, trying to figure things out.

Horgan soon appoints Jubal his foreman, and Jubal accepts with misgivings.  The prickly situation with Pinky becomes more difficult, and he has more interaction with Mae.  A group of ten “rawhider” wagons on their way to Idaho camps on Horgan’s land while some of their members recuperate from illness.  Pinky and several Bar 8 riders try to run them off, but Jubal overrules him and lets them stay, incurring the gratitude of their religious leader Shem Hoktor (Basil Ruysdael) and the admiration of his daughter Naomi (Felicia Farr).  Naomi is promised to Jake, another member of the group who is jealous, and Jubal hires Reb Haislipp (Charles Bronson), a good-natured cowboy who’s been riding along with the rawhiders.

Tensions on the Horgan ranch get higher with mountain lions raiding their stock and with Jubal developing a romantic interest in Naomi, which she reciprocates.  While the men are camped far from the ranch house on roundup, Mae lures Jubal back to the ranch and tries to get him into bed.  He doesn’t go for it and heads into town and starts drinking.  Reb goes looking for him when he doesn’t return promptly.  Pinky is filling Shep’s mind with imprecations of a relationship between Mae and Jubal.  When Shep gets back to the ranch, Mae lies and says it’s true.  Shep bursts into the saloon and starts shooting at Jubal, who’s not armed.  He doesn’t want to shoot back, but when Reb tosses him a gun he uses it in self-defense.  Wounded, Jubal makes it back to the rawhider wagons.  They take him in, with Shem Hoktor’s wagon heading east to hide him, and the rest heading west for Pocatello.

Valerie French as the faithless Mae, coming on to Jubal (Glenn Ford).

Pinky arrives at the ranch after the killing and intends to renew his former relationship with Mae, who doesn’t want him now.  He beats her badly and recruits a posse of his Bar 8 friends to hunt down Jubal.  It takes a couple of days, and by the time they find Hoktor’s wagon (with the help of jealousy-crazed Jake), Jubal is heading back for the ranch so Mae can tell the posse the truth when they get to him.

Mae is in bad shape when Jubal finds her, but she manages to tell the doctor the truth about her and Jubal and about who beat her before she dies.  As the posse fingers their rope while looking at Pinky, Jubal and Naomi ride off into the sunset, or maybe just to Idaho.

This is one of director Delmer Daves’ bigger movies, shot in color on location in Jackson Hole (like The Big Sky and Shane) and with lots of low camera angles that emphasize the sky and the magnificent Tetons.  The movie is well-paced at 100 minutes.  Cinematography is by Charles Lawton, Jr., who worked on many westerns (including 3:10 to Yuma and Comanche Station).  The very good screenplay is by Robert S. Hughes and Daves.  The music by David Raksin (Laura, Big Hand for the Little Lady, Will Penny) is also excellent.

The cast is very good, especially Glenn Ford and Ernest Borgnine, whose performances are well-calibrated.  Ford made the original 3:10 to Yuma with Daves the next year, and he was excellent in that, too.  See Ernest Borgnine in bad-guy roles from the same period in Johnny Guitar and Bad Day at Black Rock, and as a semi-good guy in The Badlanders.  Charles Bronson has a good-guy role, rare for the pre-Magnificent Seven stage of his career, and Jack Elam is one of the Bar 8 riders.  Rod Steiger is effective in another of his nasty bully roles from the 1950s.  Steiger had played the title role in the 1953 telecast of Marty, and Borgnine had just won an Oscar for the same role in the movie version (1955).  This was Felicia Farr’s movie debut, and Daves clearly liked her; she shows up again in 3:10 to Yuma and The Last Wagon. 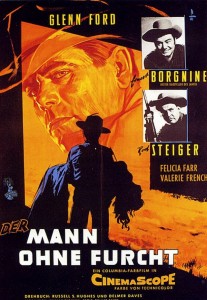 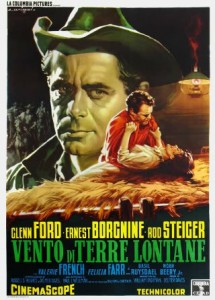 This melodramatic range saga has overtones of Shakespeare (Othello), although in this case the wife is young and faithless, and of Biblical stories (Joseph and Potiphar’s wife; and Jake is referred to as a Judas).  It’s often referred to as an “adult” western because of the all the sexual tension.  It was adapted from a novel by Paul I. Wellman.  For another big melodramatic range story, see Tribute to a Bad Man from the same year, one of James Cagney’s few westerns (he was not a natural in them).  But this one is better.  For other westerns from this stage of Daves’ career, in addition to 3:10 to Yuma, see Cowboy with Glenn Ford and The Last Wagon with Richard Widmark.

As of May 2013, Jubal is available on a Criterion Collection DVD, which refers to it as “an overlooked Hollywood treasure from genre master Delmer Daves.”