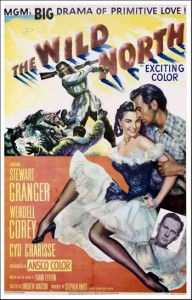 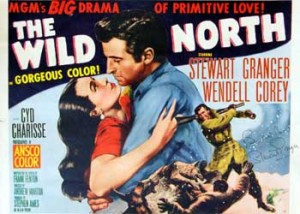 Swashbuckling Englishman Stewart Granger (real name:  James Leblanche Stewart) at the height of his American film career made this movie, the same year as The Prisoner of Zenda and Scaramouche.

Here he is French-Canadian trapper and outdoorsman Jules Vincent; Wendell Corey is Constable Pedley, the Mountie sent to bring him in for killing another trapper.  Cyd Charisse has a non-dancing role as Vincent’s Chippewa romantic interest, with not a lot to do.  Basically, this is a tale of wilderness survival.  Pedley goes after Vincent in the wilderness and captures him, but getting him back to civilization is another matter.  Vincent is much better in the frozen wilderness than Pedley is.  Ultimately Pedley gets lost and loses his mind, and Vincent rescues him both physically and mentally.  In the end, of course, Vincent gets off, since he’s good-hearted and didn’t mean to kill the guy anyway.  The movie depends on Granger, and he’s reasonably charming here. 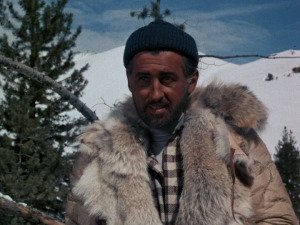 Pedley:  “You’re not a bad guy…for a murderer.  Why’d you kill the man?

Pedley:  “You fought with him the night before, over the girl.”

Vincent:  “That was no fight.  It was nothing.”

Vincent:  “That’s it, Pedley.  See?  You’re a man who should understand–and you don’t believe me.  What chance would I have in front of a jury of ribbon clerks?” 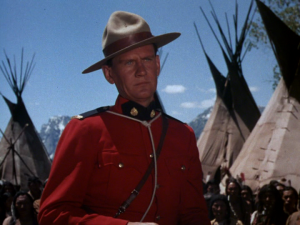 Ray Teal is part of another trapper pair that has lost its own outfit, and he offers to help Vincent escape or kill the Mountie.  The Boulder Mountains of Idaho (not far from Sun Valley), the filming location, pass convincingly for the rugged Canadian northwest, apparently. 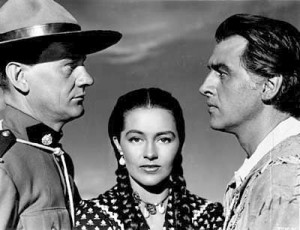 The antagonists face off, with an Indian princess between them. 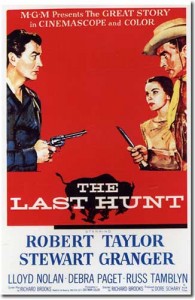 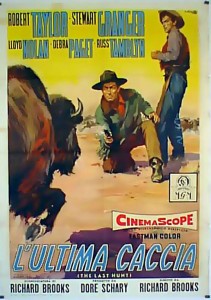 A psychological western set in 1883 in Dakota Territory, when the buffalo herds were mostly gone.  Sandy McKenzie (Stewart Granger) is a former buffalo hunter whose modest herd of cattle is destroyed in a buffalo stampede.  He is lured back to his former profession by Charlie Gilson (Robert Taylor), for a final go to make a stake to replace his herd.  They take Woodfoot (Lloyd Nolan), a one-legged alcoholic buffalo skinner, and Jimmy O’Brien (Russ Tamblyn, as an improbable-looking Indian half-breed).

As it turns out, Gilson is a killer who hates Indians.  It’s obvious that Gilson and the decent McKenzie will clash at some point.  When it comes down to the hunting, Gilson gets spooked by the buffalo and comes to see McKenzie as the source of his problems.  Debra Paget is an unlikely-looking Indian woman with a small child, acquired by the band when Gilson guns down three Indian males who steal their mules.  Gilson and McKenzie have conflicts over her and over a while buffalo skin they acquire in their hunt.

[Spoilers follow.]  Gilson gets jumpier, more unreasonable and more unstable; he kills Woodfoot when Woodfoot tries to stop him from hunting McKenzie.  However, at the end Gilson freezes to death waiting to gun down McKenzie.

Taylor is effective in a rare bad-guy role.  The downward trajectory of Gilson is sometimes compared to that of Humphrey Bogart’s Fred C. Dobbs in Treasure of the Sierra Madre.  Interesting but talky, especially Nolan’s character, and it’s kind of downbeat.  This was written by director Richard Brooks, who needed an editor for the script but didn’t have one.  (This is similar in that regard to the better The Professionals ten years later, also written and directed by Brooks.) 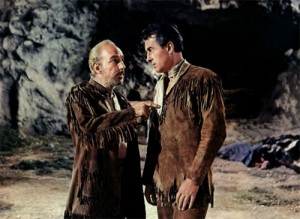 Some of the attitudes here seem a bit anachronistic—more politically correct than they would have been in the 1880s, but certainly less so than in the current 21st century.  There is more angst and psychological disintegration here than in most westerns.  Based on a novel by Milton Lott.  Shot in color in South Dakota.

For more Stewart Granger in westerns, see The Wild North (1952) and North to Alaska (1960).  As the titles suggest, those are northern westerns set in northern Canada and Alaska.  Late in his career he also moved into German movies adapting Karl May’s Old Shatterhand stories.  Robert Taylor starred in westerns from Billy the Kid (1941) to the end of his career in the late 1960s.  A couple of the best of them are Westward the Women (1951) and The Law and Jake Wade (1958).  He often wore black, although he was seldom the bad guy as he was here.  During the 1950s Debra Paget often played exotic ethnics, including several movies in which she played Indian maidens, as she does here.  The first (and probably the best) such was Broken Arrow (1950), in which she plays a young Apache woman who marries James Stewart; she was only 15 when filming began on that one.