Everett Hitch: That was quick.

Virgil Cole: Yeah, everybody could shoot. 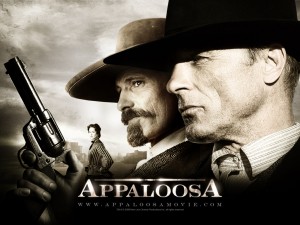 Beautifully shot in New Mexico, with lots of sepia tones, period details and the appropriate amount of dust.  Excellent production design, with a lot of attention to detail.  The story doesn’t have a lot of depth, though, and many of the film’s weaknesses seem to come from the underlying material, a novel by Robert Parker.

Partners Virgil Cole (Ed Harris) and Everett Hitch (Viggo Mortensen), of whom Cole is the dominant partner, come to the town of Appaloosa at the invitation of the town fathers to deal with local rancher/rustler/gang leader Randall Bragg (Jeremy Irons) and his numerous thugs.  Villain Bragg seems tubercular and just unnecessarily nasty.  Harris’s supposed principal character Virgil Cole needs more development, although his reading of Emerson and attempts to develop a larger vocabulary are good touches.  Irons and Harris seem too old, although western villains are frequently older (e.g., Michael Gambon in Open Range, Brian Dennehy in Silverado, and Gene Hackman in Unforgiven), and John Wayne, Clint Eastwood, and Gary Cooper certainly weren’t young in some of their greatest westerns.  That seems to indicate that Harris, or maybe just the way his part is written, doesn’t have the moral or dramatic heft to make his character more compelling or believable. 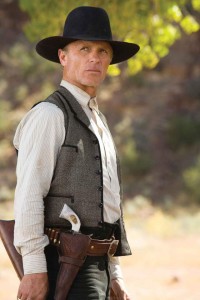 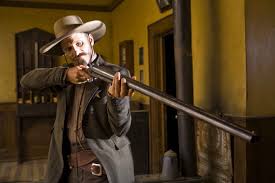 Cole develops a relationship with Allison French (Renee Zellweger), who moves in with him.  After a few exchanges, Hitch suspects that her allegiance to Cole is not as firm as it could be.  Cole and Hitch succeed in taking Bragg prisoner and transport him for trial, but he escapes from the train.  His hired escape consultants, the Shelton brothers (Lance Henricksen and Adam Nelson) also take Allison.  Cole and Hitch follow, meeting the Shelton brothers in a prototypical shootout.  After recuperating from their injuries, they return to Appaloosa, where Bragg is in charge again and Allie is with him.  Hitch finds a way to resolve matters in a straightforward way that Cole couldn’t use. 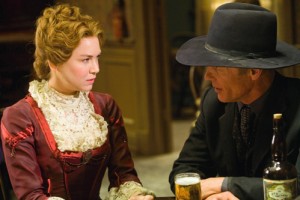 Zellweger doesn’t work very well as a woman of quickly shifting allegiances; she doesn’t have nearly enough depth or interest.  It might have been that any good-looking woman would instantly attract all males in the Old West, but it doesn’t just work that way on film.  Mortensen is the strongest character and best actor in this film.  Cole is central for a while, but fades after the shootout.  Mortensen’s haircut and facial hair seem unusually authentic, and one wonders how he manages to carry that heavy-looking shotgun (they say it’s an 8-gauge) through the entire film.  The town fathers are a good group of character actors, especially Timothy Spall and James Gammon, although Gammon isn’t given nearly enough to do. 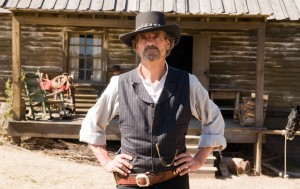 The plot begs for comparison with Rio Bravo, and comes up significantly short.  It also has similarities to 1959’s Warlock.  Perhaps a more experienced or more Hawksian director would have done better with the film’s pacing, could have gotten a better performance out of Zellweger, done better with the supposed male bonding and given less deference to the source material.  Most of the characters except for Hitch (Mortensen) seem underdeveloped, and Hitch usually doesn’t seem quite central enough to the story.  There just isn’t enough real development here, and the ending feels like the story is only half told, or perhaps two-thirds at most.  Violence by itself isn’t enough to build a solid western on, if you don’t care more about the characters.

Big-budget, well-produced westerns are rare enough in 2008 that one wants to like any such creature.  But this one isn’t as good as its various elements suggest that it could be.  The most glaring weakness is in the writing.  However, it’s watchable enough to enjoy at least once, even if the lingering taste is not as satisfying as one would wish.  Directed by star Ed Harris.  Not to be confused with The Appaloosa (1966), with Marlon Brando and John Saxon.  Cole, Hitch and Allie show up in the continuing series of four Cole and Hitch novels by Parker.  For Mortensen in his only other western (and it takes place mostly in the Arabian deserts), see Hidalgo, which is engaging.  For Ed Harris in another western, see him in the made-for-television version of Riders of the Purple Sage. 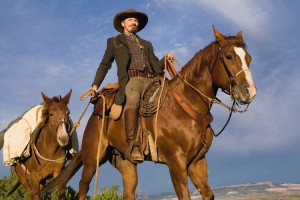 Note:  In addition to the shotgun, Hitch wears his pistol on his left for a cross-draw, authentically enough.  In two set-piece gunfights, Cole and Hitch don’t play it for a quick draw, but approach the action with guns already drawn.  That’s probably more historically authentic than the classic face-off and draw, too.

Second Note:  The name of the town (and movie), Appaloosa, seems to be a historical anomaly.  It’s supposed to be in New Mexico in 1882, a time at which appaloosas were not well known anywhere but in Nez Perce home country.    They were a breed of horse developed by the Nez Perces of northern Idaho and northeastern Oregon, one of the very few tribes that practiced selective stock breeding.  In the wake of the Nez Perce war of 1878, the breed was all but exterminated anywhere until its revival in Idaho in the 1930s and 1940s.