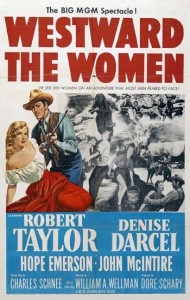 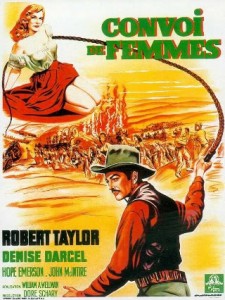 Surprisingly effective wagon train story, perhaps the best ever made.  Despite the title, the lead character is Buck Wyatt (Robert Taylor), the hard-bitten wagonmaster leading an international wagon train full of women from Independence to California in 1851.  Although the cast of women has no big names in it, it’s an effective group with good differentiation between characters.  Perhaps that’s Wellman’s doing. 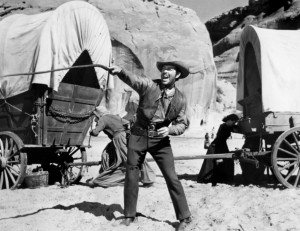 Buck Wyatt is recruited by Roy Whitman (John McIntire), founder of a town in California without women, to guide the wagon train from Independence, Missouri.  That’s a long way, and many of the men initially hired can’t keep the rules imposed and leave the women alone.  So it’s mostly Wyatt, Whitman and the women, who have to adapt to the harshness of the trail.  Whitman intends the women as potential brides for all the unattached men in his town, and for a woman to be willing to undergo this trek, there must be some backstories to them.  There are, and many of them come out bit by bit.

Taylor is excellent, as is Denise Darcel as Fifi Danon, his eventual romantic interest.  There are good scenes of what it takes to get wagons through difficult terrain, and what it cost in terms of life.  There’s an Indian attack, during which no actual Indians are shown, flash floods, mule stampedes and equipment failures.  A particularly effective scene is the aftermath of the Indian raid, when various women call out the names of the dead and the camera pans to each victim’s lifeless body.  It shouldn’t work as well as it does; Wellman again.  Henry Nakamura as Ito the cook is also very good, as is Hope Emerson as Patience.  In black and white with very good use of what appear to be southern Utah locations. 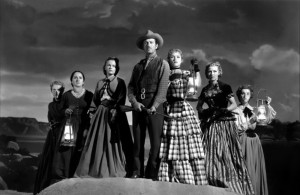 There are the usual mistakes with women wearing pants (they absolutely wouldn’t have in Victorian times), and, with the exception of Patience, they don’t appear to wear hats or other headgear in the desert nearly as much as they would have had to.   We know that’s so we can see their faces and differentiate among them, but still.  Wellman appears to have minimized the makeup on the women as well.  As with most westerns set in the 1840s and 1850s, the guns are anachronistic.  In black and white, with cinematography by William C. Mellor; story by Frank Capra.  Robert Taylor played a character named Wyatt in his last western as well:  Return of the Gunfighter (1967).

Director Wellman was notoriously disdainful of actors, but he liked Robert Taylor.  “I have never gotten along with actors but I was crazy about Bob Taylor.  I think he’s one of the finest men I’ve ever known.  He was probably handsomest of them all.  I had no trouble with him at all.  He did everything I asked him to; he was wonderful.” 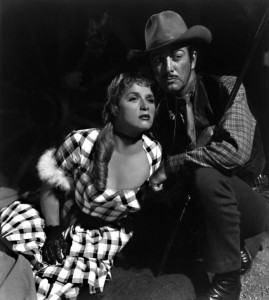 This was shot on location around Kanab, Utah, so even the scenes where they take off from Independence, Missouri, look like southern Utah.  Southern Utah may have a lot of variety in the scenery available around Kanab, but none of them look much like Missouri.  The desert scenes were shot in the Mojave Desert.  The movie has no music except over the opening and closing credits, and it’s one of the things that gives it verisimilitude.

This was finally available on DVD in May 2012 from the Warner Archive.  The DVD contains an excellent commentary by film historian Scott Eyman.  For another good wagon train movie from the same period, check out John Ford’s Wagon Master (1950).  For another good Robert Taylor western from about the same time, see him in Ambush.(also with John McIntire).  For another good western directed by William Wellman from this period, see Yellow Sky with Gregory Peck and Anne Baxter.