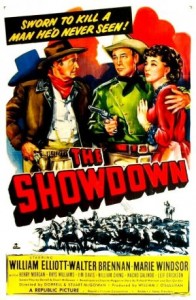 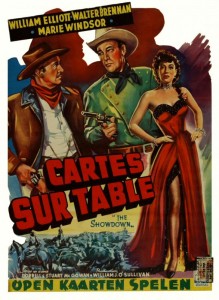 Not a terribly meaningful title for a cattle drive movie.  Stoic actor Wild Bill Elliott starred in a lot of B-type westerns and crime stories in the late 1940s and 1950s, including several as Red Ryder, but he was kind of stone-faced and not very charismatic.  If you want to watch one of his westerns to see what he was about, you could do worse than trying this one.

William (Wild Bill) Elliott is Shadrach Jones, an ex-Texas State Policeman looking for his brother’s killer.  The movie opens with Jones digging up his brother’s body, to find that he’d been shot in the back with a small-caliber gun.  Figuring the killer to be one of the hands on a trail drive to Montana, he signs on as the trail boss for owner Cap MacKellar (Walter Brennan) of the Circle K after he has to kill Big Mart (Leif Erickson), the existing foreman.  Marie Windsor (queen of the B-movies) is Adelaide, saloon owner and partner to MacKellar, with perhaps a romantic interest in Jones.  She shows up to go on the drive, theoretically to protect her investment but really to have a female on screen through the movie. 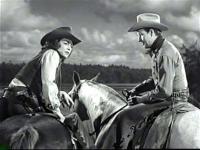 [Spoilers follow.]  The drive has the usual vicissitudes (stampedes and related deaths), with the added element of somebody killing various participants as the drive moves along.  Finally an accident gives MacKellar a mortal injury and he admits that he did the shooting of Jones’ brother, leaving a number of loose ends in the plot.

There are some spots where the background is too obviously painted, and the supporting cast is stronger than the lead.  Walter Brennan gives the best performance in the film as McKellar, the owner of the herd.  Charles Stevens (grandson of Geronimo) is another of his Indian Joe characters.  Harry Morgan is good as Rod Main, a gunhand hostile to Jones from the start.  Rhys Williams is Chokecherry, the one-handed cook and chuckwagon driver.  On the whole this seems slightly better than a B movie, with a better than average script.  A Republic film with a low budget and some noir elements, but it’s better than it deserves to be.  Black and white, 86 minutes.

Not to be confused with either Showdown (1963) with Audie Murphy, or Showdown (1973) with Rock Hudson, Dean Martin and Susan Clark.  Not to mention Fury at Showdown, Showdown at Boot Hill, etc.